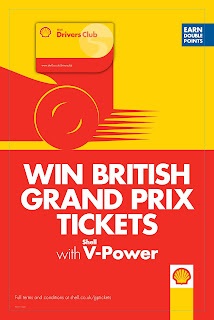 
As all F1™ fans will know, the competition on the track is hotting up with every race. So far this year, we’ve seen Jenson Button win the Australian Grand Prix, Alonso performing at his peak and now only 10 points off the lead in the championship and Vettel coming from behind to win the race in Bahrain – surprising everyone. Anything could happen and the British F1™ Grand Prix at Silverstone on 8th July 2012 will be no exception – the race is set to be an exciting one.

Thanks to Shell V-Power fuels, I have one pair of Grandstand tickets to this year’s British Grand Prix, worth £500, to give away! So you can witness for yourself the best, the worst, the most exciting and the most nail biting performances.

All you have to do is answer this question:
With the competition heating up since the start of the year, this year’s track performances at the British Grand Prix will be something to look forward to. What, in your opinion, is the greatest ever F1™performance and why?

Please give your answer in no more than 150 words in the comments below. Make sure you leave either your twitter address or other means of contacting you. Entrants who are not contactable will not be included in the competition.

A driver’s performance comes down to many things: the car, the weather, his sheer determination and the fuel that he uses. Shell V-Power fuels have unique formulations designed to enhance engine power through active engine protection. These are designed to help engines to perform to their optimum potential. Shell V-Power fuels’ unique double action formulations are designed to actively clean the engine and protect vital engine parts to help deliver more power.

Whose performance will win them this year’s British F1™ Grand Prix title? You could be there to see for yourself. The competition closes at midnight on 18th June 2012 and I’ll announce the winner on 25 June 2012. Full terms & Conditions are here

If you’re not lucky enough to win this competition, there are more tickets up for grabs as Shell customers have the opportunity to win pairs of British Grand Prix tickets with Shell V-Power and Shell Helix purchases at participating Shell sites across the UK. Simply fill up with a minimum of 15 litres of Shell V-Power Unleaded or Shell V-Power Diesel or purchase any Shell Helix product on site, swipe your registered Shell Drivers Club card and you’ll be entered into the draw. Entrants must make sure their card is registered at the time of purchase or before the draw takes place.

Good luck to everyone!