I am a diehard, old school Tetris fan. back in my days at university I could play the Nintendo Gameboy version so well, the screen used to blur. Nowadays this skill comes to the fore when I have to load our car to go away for the weekend. Everything has to be packed tighter than a load of Tetris shapes, and then taken out and repacked fifteen minutes later when a large bag I was unaware of appears in the hallway. Such is my lot in life but it gives me an excuse to keep out of the way of the bedlam that kids getting ready to go away generates. 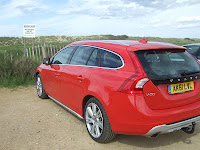 Unfortunately this weekend just gone, I had no such luxury. Volvo kindly lent us a V60 D3 for the weekend to go up to Norfolk in and it genuinely was just a case of opening the boot and lobbing everything in. So I had to help the kids get ready. At various points they were both ready to go, unfortunately never at the same time and then when they were, Danger needed a nappy change and a bottle. Still, if you look hard, you can see an Out & About pushchair, a moses basket, wellies and a load of holdalls (well you can’t see the holdalls because they’re buried in the back of the boot but you get my drift) just casually slung in the boot.

The V60 is sort of an estate but at the same time not. It lacks the angular shape of traditional estates and looks for all the world like an elongated hatchback really. Volvo refer to it as a sportswagon and that’s fine with me. The D3, a 2.0l diesel, has plenty of oompf whilst proudly proclaiming it could do almost 600 miles out of a tank of diesel. That got us up to Norfolk, around and about for the weekend, back, and we still had well in excess of 200 miles range left. 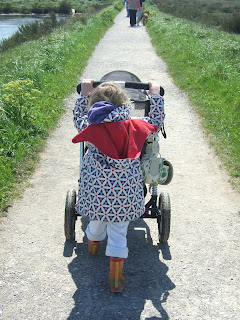 You may have noticed the weather was great this weekend gone by. That was indirectly our fault too- since the roof went on to our garage conversion there’s been an upturn in the weather. Yes, the wettest April on record was entirely our fault. Sorry about that. Still, it meant we got to do some nice driving around in Norfolk and I got to remember what it’s like to overtake on single carriage way roads. Putting your foot down in the D3 is a pleasant experience, as the car surges forward in a most remarkable fashion. Looking at the numbers though, I have sworn I will never ever get in my mum’s car to go anywhere with her, since she drives a V50 D5, and that’s more than half as powerful again as the V60 D3. I can now pinpoint to the day when my dad’s hair went white, it was the day 4 years ago they picked up the D5 from the Volvo dealership.
You can see we got up to some fun stuff whilst away, plenty of sunshine naturally lead us to the beach on more than one occasion and Fifi proved invaluable in pushing Dangers buggy along. The boy went on a mini bug exploration adventure and the only bit of drama we had was getting two exhausted but very excited children to bed in the lovely suite at the Red Lion pub at Stiffkey (thankfully for once the sign naming the village hadn’t been vandalised. They often have the “k” painted over). Even filling the kids up with food didn’t make them sleep but if you’re ever up that way, I heartily recommend the food at the Red Lion.

The V60 has some very clever trickery in it. I liked the blindspot cameras that flashed an orange light on the inside front of the drivers and passengers door to show when there was a car in your blindspot. Although our kids are too young at the moment, the way the rear seats folded up to provide built in booster seats was also very clever too. The remote control for the stereo baffled the pair of us, although it was very well built and had more buttons than our Sony mini system in the sitting room does.
What impressed me the most though was the ability to get two kids seats and a baby bucket car seat across the back. It was a bit of a wedge but they all got strapped in properly and were wobble free and safe in that way you only get with a Volvo. I remember my dad’s first Volvo, a metallic light blue 240 back in the 80’s. That felt like a tank and even had a mysterious “overdrive” button on the gearstick. The V60 feels like a tank too and even packed with all our gubbins was completely and utterly rattle free.
When we bought our 5+2 (the two being pop up boot seats) Vauxhall Zafira, I was slightly in two minds over people carriers. Before the segment was created families seemed to do more than well enough with estate cars. I think the Zafira, based as it is on the Astra, confused me. It’s considerably more narrow than the V60, so we actually have to use one of the pop up seats in the boot when all 5 of us our out and about, a need that’s obviated by the slightly wider V60. But to be fair, I’ve not come across that many cars that are wide enough to take all 3 kids seats without complaint.
So when we’re looking to replace our Zafira, I’m not going to be as blinkered. In that sense the Volvo V60 has really opened my eyes.

If you fancy a weekend away courtesy of Volvo then keep an eye on @VolvoCarUK twitter page. From 10am until 6pm today (May 27th) they’re running a promoted twitter trend (#V60getaway). As well as giving away family holidays (such as a glamping weekend and a trip to Scotland) there are iPod Touches, Kindles, in-car DVD players and Merlin premium annual passes up for grabs.