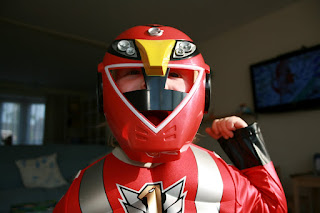 Our lad is definitely his own person. There’s no doubt in that. Whether it’s building a pile of clothes on our bed in an attempt to get to the moon or deciding apropos nothing to wrap himself up in a sheepskin rug and kip on the floor instead of his nice comfy bed, he follows his own path.

It’s something his school report reflects; last year it said “Whenever asked a question, he always thinks about it and gives a unique answer, he’s not satisfied in just repeating what other children say“. This was reflected in the schools 40th Anniversary Book, where they asked all the kids in nursery what they wanted to be when they grew up. There was the usual mixture of doctors, nurses, policemen, astronauts, fireman and so on. Two little girls wanted to marry the boy, one even specified how many children he had to expect. They boy? He wanted to be Spider-Man and this is immortalised in print.