We have more change bags than you can shake a stick at (and we keep a stick handy for just that purpose). The Okiedog changing bag is a bit different though. We have change bags through the colour spectrum, from pink and flowery, pink, girly flowery, through to plain black. The plain black bag is at best a unisex bag and from memory this was actually a freebie from Boots. So when Okiedog offered to pop a bag in the post for me to review, I jumped at the chance. I’m sad like that :) 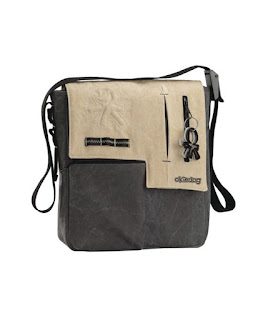 What the Okiedog changing bag is, is an unashamedly “Dad” changing bag. At a push, I could maybe even use it as a manbag because it looks trendy enough and is basically made in the messenger bag style. It has all the practical features you’d expect from a change bag, apart from the flowery design, including an adjustable strap, a change mat, a nappy bag and several water(poo)proof compartments.

It’s a nice faux suede design with a couple of logo tassles hanging off of one of the loops on the front. If I had to level one criticism at the bag, it would be the clasp that you use for the shoulder strap. It’s the sort I don’t personally get on with and seems to unclip all the time. I find this common to all bags with this design, so it’s nothing specifically wrong with the Okiedog changing bag itself.

To test it out efficiently, I took it, Fifi and Danger on a trip to Whipsnade Safari Park while wifey took the boy to a birthday party. It’s hardly the first time I’ve taken a baby out on my own, we do own 3 after all but it was immediately nice not to have a garish pink bag with me.

My strange fixation with shoulder straps aside, the internals of the bag are great. It has a bottle holder in one corner, the internal back has a fastened pocket that spans the whole back end. This came in very useful when Danger needed a full outfit change at the zoo after doing a mega-carseat-poo before we even got out of the car park. The front of the bag has a couple of internal waterproof pockets that I stashed the spare-spare change of clothing in, along with the snacks. The Okiedog comes with two internal bags, one for nappies and the other for (I assume) babywipes but given the large capacity and so on, I didn’t use these, I just bunged everything in and cursed inwardly* when it came to mega-poo panic stations as I tried to change a small boy who was determined to pivot over onto his front while I was holding him by both ankles and rummaging around in the bag.

As a result of the mega-poo I was exceedingly pleased that the change mat was plain white, as this made it much easier to spot the chocolate kisses Danger had left me. The change mat is impregnated with anti-bacterial stuff but fortunately isn’t turd repellent. The outside of the bag has various pockets too, which I rather optimistically filled with bloke stuff in the hope that the baby would go to sleep and Fifi would sit still and eat her chips. No such luck of course!

We also took the Okiedog to Butlins for our summer holiday. It proved it’s worth time and time again as I ended up leaving wifey with the two older kids on the rides while I slipped away to muck out the smallest. Having a change bag that’s squarer than the normal sort was pretty useful in the cramped confines of babychange facilities too.

The Okiedog Yukon Paige changing bag retails for £70 but if you shop around you can get it for somewhere in the £50’s. At this price, I think it represents good value for a nicely made bag with the Dad in mind.

The Okiedog Clipix is a cunning system that allows you to attach different things to pretty much any stroller or puschair going. Obviously some change bags have this built in via velcro clips but the beauty of Clipix is it is more flexible than just attaching a change bag. You can get adaptors to put drink cup holders or mobile phone holders on for example but the coup de grace is the LED flashing light. Obviously being the middle of summer we didn’t get the chance to try this out properly but I can see it being useful in the winter since our Out and About pushchair is a bit of a ninja device, being black and all. I didn’t find it too tricky to attach the Clipix to the tubular metal frame on the pushchair and the bag obviously attached very easily. You can pick up the Clipix base set for around a tenner in a variety of colours but if you chose anything other than black, I’ll want to know why.

*I always curse inwardly since Fifi said to me the other week, “Daddy, you mustn’t say ‘oh shit’ because that’s naughty” No idea who she got that from but it certainly wasn’t me.