Video-blogging seems to be getting ever more popular and it’s easy to understand why. Smartphones now shoot really good video, and uploading it is a doddle. Youtube even lets you edit videos that you’ve uploaded. Which is nice.

But who exactly is watching your videos? I’ve posted a few to Britmums, and seen the numbers for the first 100 videos (the “most popular filter doesn’t work). With the exception of one video with 126 views, the vast majority have had single figure views. Hardly inspiring for the self proclaimed biggest parenting network in the UK but perhaps it’s a supply and demand thing; perhaps parents have little or no interest in watching videos made by other parents. It’s borne out by my blog stats, video posts I do don’t often sit in weekly or monthly top tens in terms of visitors.

Does this mean that vlogging is a waste of time then? Well no. It’s just your audience isn’t necessarily who you think it is. Let me explain this with a chart: 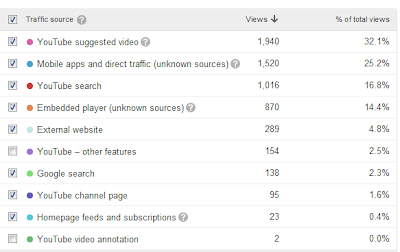 Views of my video blogs embedded in my blog (or on Britmums for that matter) only accounts for 14.4% of the audience. It’s almost trivial in comparison to the traffic that Youtube itself send my way. For example, a Greco Nautilis car seat vlog I did has had 350+ views on the blog, but the video has been watched 1,750 times on Youtube. That’s 5 times more views in total on Youtube than just on the blog.
In fact when I look through all my video posts, I get at a bare minimum 3 times as many views on Youtube as I do via my blog.
I have my own Youtube channel set up of course, and I am meticulous at tagging the videos properly and putting an informative description in. All of this helps Youtube recommend my videos to other people. And what’s more, it seems to be a different audience. Youtube doesn’t feature in the top ten referers to my blog. On the one hand it’s a shame that I’m not converting video viewers into blog readers but on the other hand, is there much of a natural overlap anyway?

I try to do something different with my video blogs which probably helps. Talking/reading something out straight to camera for 3 or 4 minutes is a bit pointless, that’s a blog post isn’t it? Vlogging has to be visually interesting, which is why I grew a ‘tache (honest) but overall I think I’ve had the views I’ve had because I tag the content properly.

Has anybody else looked at their vlog stats and compared them against their Youtube views? I’d be interested to know if you get similar results.