Hurrah for the Wiggins, he has won the Tour de France and a gold medal at the Olympics. He has also proved a witty and intelligent bloke (or at least he’s not had his wit and intelligence media-coached out of him) in interview. Since he’s not been coached excessively by a Max Clifford clone, he still has opinions and one of these has upset the cycling charity CTC. 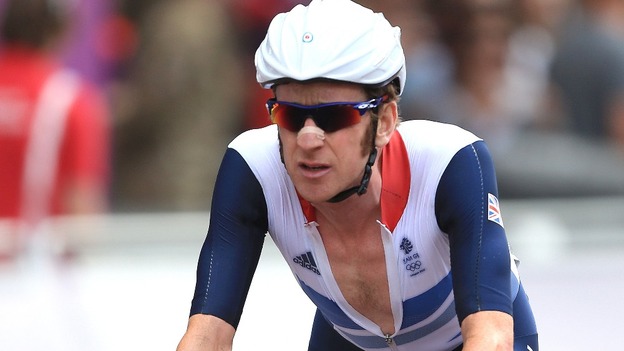 Wiggins was asked about the tragic accident in which a coach load of journo’s flattened and killed a cyclist last night outside an Olympic venue. He came up with some ideas that to casual cyclists like me sound sensible:  Wiggins suggested that making helmets compulsory and passing laws restricting cyclists from listening to music would enable cyclists to say that they had done as much as they could and therefore the responsibility must rest with motorists.

Of course since I was almost run over on a pedestrian crossing by a cyclist who didn’t want to change down his gears the other day and actually do his legal duty and stop, I’d also add “obey the laws of the road” to the list but I’m old fashioned like that.

CTC are quite anti helmet, I suppose for a couple of reasons. Firstly it apparently gives cyclists a false sense of security and secondly mandatory helmet wearing reduces cycle use as people are put off of cycling. Their spokesman then gave out some spurious stats about half the cycling deaths in London being caused by lorries flattening cyclists whilst doing left hand turns, a circumstance he says that cycling helmets wouldn’t affect at all. Bit of a straw man argument in my book, a helmet isn’t there to protect you from a lorry. Heck, from some of the wrecks I’ve seen, a huge Land Rover Discovery isn’t enough to protect you from a lorry. A helmet is there to protect your head from the impact of hitting the ground. They tend to do that fairly well, something looking at statistics of cycling death wont of course pick up.

I’m sure we’re looked at askance for putting helmets on our kids when they scoot as well as cycle, but hitting a tree root whilst flat out on a scooter causes a face plant every bit as hard as falling off a Ben 10 bike with stabilisers as far as I’m concerned. When the boy did just that, he still had blood all over his face, even though his helmet had taken the majority of the impact.

CTC believes that the priority should be on improving the road network and the criminal justice system, not laws that impose restrictions on cyclists. To my mind, regardless of rights or wrongs, I’d rather have a live cyclist than a dead one, with a motorist given a very severe prison sentence and I’m sure I’m not alone in that.

CTC spokesman Chris Peck says, “Two thirds of collisions between adult cyclists and motor vehicles are deemed by police to be the responsibility of the motorist. Any legislation should put the onus on those who cause the harm, not the victims.” I completely agree with this but it’s retrospective isn’t it? The damage has already been done. When you’re looking a a few kilos of bike against a tonne plus of metal on 4 wheels, punishing people for running over cyclists should be secondary. I personally wouldn’t want to spend the split second before I died after being hit by a car in righteous anger, knowing the motorist was going to get the book thrown at them, I’d rather cycle over cautiously and not get run over. Of course even being over cautious wont save you all the time but it’s a start.

CTC are right though in that Wiggins has an opportunity given his profession and new found fame to put cycling safety on the agenda. Lets hope he does this in a sensible holistic fashion, rather than a militant reactionary way.