Wifey, being an enormously thoughtful and great mum, had made sure the kids have had lots to do and see during the long long summer holidays. I suspect this is also partly down to an attempt to hang on to what shredded tatters of her sanity she can, whilst trying to look after 3 kids but I digress. Along with a friend and her kids, they’ve been doing things like themed days on social history, natural history and countries.

On such day was Italy day, which culminated in a trip to our local Italian restaurant, Cosa Nostra. But before that they drew pictures, made flags, learnt about the Romans, Prada, Versace and more importantly of course, Ferrari. The boy was so taken by it he drew this: Which is obviously a picture of me, his Dad, driving a convertible Ferrari. I can’t be sure, but I think it might be a 458 Spider. This leads me nicely on to a day I had a while back with Shell and Ferrari at the Science Museum in London. I would be lying if I said the main draw for me was to meet Massa and have a go on the proper Ferrari F1 simulator that the team use for off track testing (and if you’ve forgotten how I fared on this, *ahem*) but the real focus of the event was to look at the various technical partnerships and expertise that exist between Shell and Ferrari.
One of the things I really took away from it is how Shell shares technical expertise with Ferrari and how the cross pollination improves everyones understanding and expertise. You know, the sort of car and fuel in symbiotic harmony sort of thing. This obviously filters down to us plebs who aren’t driving either F1 cars or road going Ferraris over time too. The fuels that Shell develop for the Ferrari F1 cars are substantially the same as the fuels that end up in our cars, and I personally find that a bit mind boggling. 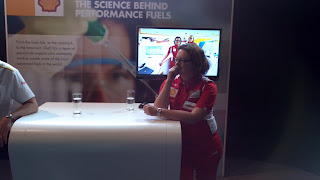 The other thing that was of particular interest to me was the depth and breadth of education in Shell and Ferrari. I asked one of Ferraris head honcho types whether there was a particular university he recommended for engineering degrees, which was probably a bit unfair of me because he could obviously picture a “as recommended by Ferrari” logo appearing in a prospectus before the day was done if he did indeed name names. Shell are also awesomely keen on ensuring that existing staff have proper opportunity to fulfil their potential though, whether it’s additional training or in some instances the opportunity to do an actual degree whilst employed, something that came across with whomever I talked to, even if they were wearing jumpsuits. I would love a Shell jump suit personally, and would frankly wear it pretty much 24/7 at the weekends. And if you know me, you’ll know this isn’t an idle threat.
But I’m sure you’re wondering, did I actually really really meet Massa? Well, wonder no more: 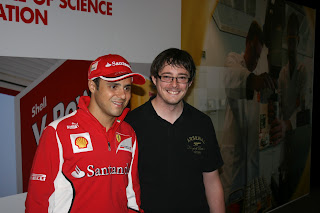