Since it’s been ten days since I wrote to the Swiss Embassy, and I’ve not even had an acknowledgement of receipt from them, I thought I’d repost my letter here.
The Ambassador
Embassy of
I’ve blacked this out
So you can’t see
My address
Nice try though J
11 September 2012
Dear Sir,
I live in St Albans and on occasion have to commute into for work purposes. Today, 11 September, was one such day. I boarded a near empty train and took a window seat. After one or two stops a gentleman boarded and sat next to me.
He proceeded to elbow me with vigour for the next few minutes until I asked him if he intended to continue doing so for the foreseeable future. I received a torrent of abuse about my selfishness in taking space he thought he had a right to, and no form of apology for the near physical assault I suffered. He also suggested I should move in a most intimidating fashion.
This sort of behaviour is of course very common on our public transport. I am bringing this to your attention because the gentleman in question then produced a paper on the issuance of government bonds with the following logo on it:

This has led me to believe that if not directly an employee of the Swiss embassy, he is at least known to you.
I attach for your perusal a photograph of the said miscreant, and would encourage you to have him write a formal apology for his behaviour, addressed to me at the above address. If I have erred and he is not known to you, I apologise for taking your time.
I have checked with a colleague who is part Swiss and spends some time in , and he has confirmed it is not a quaint Swiss tradition to elbow people vigorously rather than politely ask them to budge up, so I am reasonably happy I am not on the wrong end of a cultural misunderstanding in this area.
Yours Faithfully,
Alex 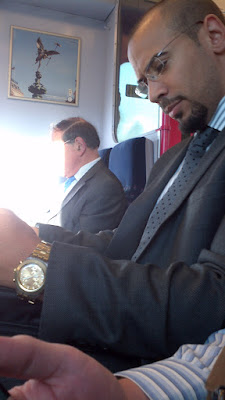