My one solitary attempt at a BBQ in what we have mockingly called summer this year turned out to be a bit of a disaster. I got a disposable BBQ from Waitrose because our proper one had rusted through the bottom but the dratted thing didn’t light properly. This is always a bit of a problem when cooking sausages, so everything ended up under the grill. Step forward Philips then, with an offer of one of their swanky new indoor BBQ’s, the Avance Grill.

A recent kitchen tidy up has given us some spare worktop space, so I said yes and had a thumb through a PDF of the Philips cookery book and picked a couple of recipes out. Philips sent me a grill and a voucher to buy the ingredients for a couple of the recipes.

On unboxing the Philips Avance Grill, I initially thought it was just a single sided George Forman style grill- it has a glass lid and the grill is half ridged and half flat. Fortunately less appears to be more and the Avance Grill does have a couple of tricks up it’s sleeve that really separate it from run of the mill electric grills.

In a practical sense, the integrated drip tray is brilliant. Such a simple idea but it means there is nothing to get knocked out of the way in a busy kitchen. There is also a reservoir for water to keep things moist, and a little metal pot for woodchips to add an authentic BBQ flavour to things.

In addition to all this, the Avance Grill gets hot. Really hot. 240 degrees Celsius hot, which is hot enough to give the meat an authentic BBQ line down it. If I had one slight criticism, it would be it takes a fair while to get up to heat but once you’ve factored this in (and there is a 1-5 knob for the heat level), it’s a liveable criticism. 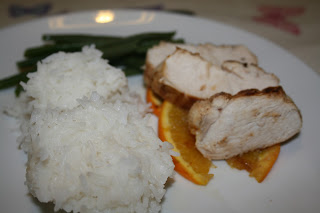 So what did I cook then? Well first off was Grilled Chicken and Oranges. Not the first time I’ve made a marinade but it was a particularly yummy one. The grill kept the chicken moist but cooked it well. I did have particularly large breasts (phnarrr!) and the grill wasn’t quite deep enough to close the lid without the glass pressing on the chicken. The recipe has you cooking the chicken for 15 minutes in total but I had it in for 25 and it was by no means overcooked.

I plated it up in true MasterChef style and it went down a treat. 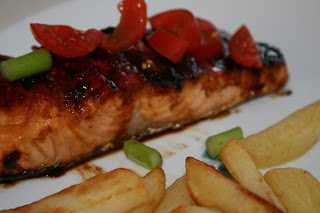 However the Avance Grill really came into it’s own with the Grilled Salmon Steaks. These were marinaded in a honey, mustard, and lime concoction and served with a spring onion and tomato salad. And chips. Sorry about the chips. Wow, this went down astonishing well. The boy said it was the best thing he’d ever eaten, ever, and wifey said it was restaurant quality.

Of course cooking is only part of the process and I’m pleased to say the Avance Grill was also pretty easy to clean too Lots of it is dishwasher safe, which makes a pleasant change. It has a very contemporary look whilst a lot of kitchen grills have a chunky kiddy look to them. Since the main oven packed up on our cooker for the second time, we’ve been waiting until we have our kitchen refitted to replace it. This means we’re using the combi top oven/grill as an oven and tend to be pan frying meat. A lot of those counter top grills are a pain as there’s no finesse to the controls, they’re messy to use and a pain in the neck to clean. The Philips Avance Grill remedies all these gripes and genuinely does work as an indoor BBQ.

Retailing for an RRP of £120, you can get the Philips Avance Grill from places like Argos and Homebase.