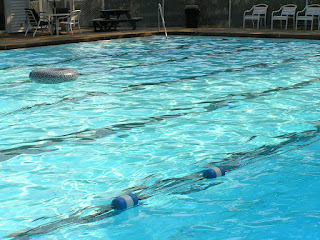 After an interruption due to our trip to Butlins, the kids swimming lessons were back on course on Sunday. We’ve been taking the boy and Fifi for over a year now, and Danger for a couple of months. Brenda the swimming instructor is ex international level (she used to train and compete with Sharon Davies), so she knows her onions. Progress is relatively slow because she teaches the kids the right technique from day one, so rather than learning to swim quickly then having to unlearn a lot of bad habits as they progress, they do stuff right from the start. I’m sold anyway.

As with many things, time in the pool outside of the lessons has been very important. Although the kids did relatively little actual swimming at Butlins last weekend, they did spend about 7 and a half hours in the pool over the Saturday and Sunday. They’re now happier jumping in and getting water in their ears and eyes, which in turn has helped with their progress at the formal lessons. In fact, this week Fifi was so good that she got moved up a class. There will be a brief period when she’s in the same class as the boy; he’s currently the best in his class, so he will be going up fairly soon himself.

I never learnt to swim (properly) at school and that was partly due to circumstance, partly due to my excessive height. At primary school we used an outdoor swimming pool from April onwards and it was always freezing. The changing rooms were unheated and I used to get cramp something rotten. I could also stand on the bottom with no real effort so I just sort of splashed around and hopped about on one leg most of the time. This lack of swimming skill made it a real uphill struggle to get going with my scuba diving.

Danger is only 9 months old but he’s taken to the water like a duck. His little arms and legs go on automatic as soon as you hold him in the water (he’s too little for armbands just yet) and it wears him out too. Apparently there are numerous physical and psychological benefits for very little babies associated with swimming too. Which is nice.