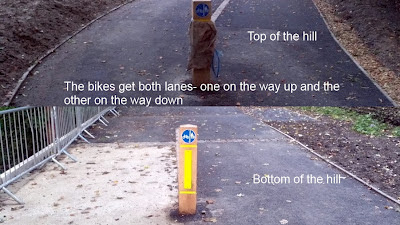 For the second year on the trot, the council have caused chaos in the park during high summer. Last year, they closed the only public toilets for the duration of the summer holidays for refurbishment. This summer, they’ve been digging up most of the footpaths to turn them into cycleways.

There are two possible ways to interpret this. Firstly, they’ve cocked it up, put the wrong sign at one end, and either the side closest to the Roman wall is the cycle lane or the side furthest away is. Secondly, they actually intend a one way system, with bikes cycling towards pedestrians in both directions. The second seems daft because this path is the route into the park for everyone and there’s a primary school at the top of the hill, so there are plenty of kids waiting to get flattened by cyclists. The first seems more probably but with local government, you just never know.

I wait with baited breath. And I’m also waiting for the first hard frost, that will lead to carnage- last year there were two ambulance visits to the foot of this hill to pick up cyclists who shouldn’t have been there but were and had fallen off their bikes quite badly at considerable speed.