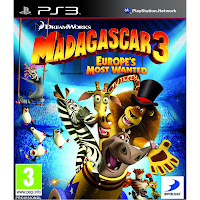 We’re trying lots of innovative ways to engage the boy with reading at the moment. He can do it if he feels so inclined but more often than not he doesn’t. So when we were offered a copy of Madagascar 3 on the PS3 to review, I jumped at the chance to enact cunning plan number 3.

The tail end of the plan needs some fine tuning but in principle it’s a sound plan. Video games also promote problem solving and hand to eye coordination too, so as long as you’re sensible, and moderate game time, they’re good in my book.
So what has the boy made of Madagascar 3 then? Although he hasn’t seen the third film, he’s a big fan of the first two so was immediately at home when given control of Marty and Gloria on the first level. The in game tutorial walks you through how to control the characters in a very gentle way and there weren’t any points where he thrust the controller at me in disgust, which is a promising sign.

The game structure itself loosely follows the plot of the film. The zoo animals end up in a circus and have to complete missions set by the penguins to promote the circus in major European cities. So really, it’s a set of fun mini-games, stitched together into a coherent whole by some top notch cut scenes that pleasingly are actually voiced by the actors who worked on the film. Kids can spot it when this isn’t done you know.

There are several game modes, so if little kids fancy jumping right to the circus tricks they can, equally they can just wander round the cities in a sandbox sort of mode.

I had a sneaking suspicion that Madagascar 3 would work even better in multiplayer mode. Typically we didn’t have a second controller so I stumped up over £30 to buy one and am happy to report my hunch was correct. We had great fun playing it together, even if I did have to pretend I don’t have 30 years of gaming experience…

You  can see just what happens in game in the trailer below: