As I progress with my intensive sessions down the Virgin Active gym in Hemel, I’ve begun to suffer that perennial problem that blokes with thunder-thighs get: chaffing! 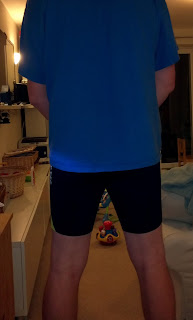 At the moment it’s a Catch 21* situation really; I’m getting fitter but still too chunky to pull off figure hugging clothing properly. However I need to wear some figure hugging trousers or smear myself in Vaseline. I opted for the Lyrca running shorts over the smearing because that’s just a bit icky isn’t it?

Okay, I’ve had to supplement them with a fairly long tee shirt so you can’t see my not quite there yet six pack wobbling as I bump around like an uncoordinated loon, but it’s allowing me a frictionless go on the machines, which is a great improvement.

My ankle is well on the way back to normal now. I managed a good ten minute run at 9Km/PH last night. I could feel the ankle afterwards but it didn’t hurt, which is a major step forward. I just hope I didn’t put the person behind me off as I hypnotised them with the rhythmic clenching and unclenching of my Lyrca clad buttocks.

Fortunately there is less buttock exposure on the bikes or the rowing machines, and I managed to work up a good head of steam on those without feeling as self conscious.