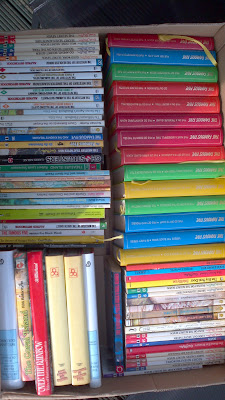 I was digging around recently, sorting out a load of boxes we had stored in the garage before we had it converted into a dump for small pieces of plastic playroom. When I came across this box of books which contained most of my Famous Five novels from when I was little.
You can’t buy these stories now. The publisher has “sensitively” re-written them for the modern age. I find this extremely problematic though.

When I read the Famous Five books in the early 80’s* the language was already anachronistic; nobody in the playground called each other “fatheads”, and I certainly didn’t have a jolly good time with lashings and lashings of ginger beer at any point but the books did appeal to some broad aspects of being a kid, regardless of the era they were either written in or read in.

The freedom the Five had was something to aspire to and the respect Julian got from adults was something I longed for as a kid too. Those things are universal. The books also fostered a great love for the outdoors in me too, which remains to this day.

I don’t see well meaning but ultimately misguided editors going back and revising Tintin books, which are after all even older, to add mobile phones, computers and other modern day paraphernalia to the mix, so I don’t see why we need our childrens classics updated either.

What’s really changed in our society since the early 80’s that means this “updating” is really necessary? Computers & video games for kids? Nope, I was playing those in 82 and 83. Kids television? Nope, I was watching poorly dubbed Japanese imports like Starfleet and Science Team Ninja Gatchaman (cut into Battle of the Planets over here) around that time. We had VCR’s to watch films on, Nintendo Game and Watch to play games on the move and most of the other “modern” distractions kids have nowadays without any of the awareness that theoretically we have today.

There are two things we didn’t have:

I’m happy I have my box of kids books because if the boy ever decides he wants to read the Famous Five or the Secret Seven, he can read them properly.
*right at the time the Comic Strip made Five Go Mad in Dorset actually