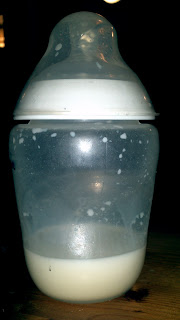 Danger is still feeding at night time. Frequently. Unfortunately we can’t really leave him to cry because it leads to a cascade of crying. His room is next to Fifi’s and if he wakes her up (lungs of an opera singer remember), then it’s game over for the rest of the house. And so we’re still getting up with him two or three times most nights. I’ve had a bit of success getting the wee lad to cuddle his teddy bear (suck the label more like) and it is the cutest thing in the world but more often than not it’s num-nums.

Since Danger is just shy of 11 months old and still feeding every 3 hours or so at night, it’s leading to a certain degree of confusion as we get cumulatively more and more tired. What we do (every night) is take a tub with 3 sterilised bottles with 6oz of water in them. We also take three little tubs with the prescribed amount of formula in them. That way there is no dicking about with scooping and counting when the crying starts.

So when I wake up for the umpteenth time in the night and go in to give Danger his third bottle of the night, only to find that there’s only one empty, it’s a bit worrying because I’m so positive I remember giving him the second one- it was 3am because I remember it being three and a half hours after the first one but it’s now ten to six and there’s only one empty, so that’s not right is it?

I don’t begrudge the little fella his feeds though and I don’t begrudge doing them; wifey does more than her fair share and she has him all day for most of the week. He’s at that age where he follows you round the house crying to be picked up at every turn. Even though he’s wonderful, that can get a bit tiring after a while.

I am beginning to doubt my own sanity and should probably give wifey the benefit of the doubt a lot more because when she says she’s been up half the night with him, I’m now not so sure that I’ve actually been up twice with him myself…