Avast! 15 men on a dead man’s chest, Yo ho ho and a bottle of rum! Despite all wifey’s protestations, I’ve been talking like a pirate all evening and have been persecutin’ scurvy dogs and land lubbers alike! You see, those salty seadogs at Playmobil have kindly sent us the boy Playmobil 5135 Pirates Ship to review. And since I’ve spent all my doubloons on rum and raucous women,  I’ve had to ask the boy to give me some thoughts about the Playmobil Pirates Ship. These are his words. He’s five, so bear with him:

“I like the whole ship, it’s like a really cool ship and it looks so cool I’m just going to scream.”

“There are those special ladders that launch the sails. There’s special string that goes up to make sure it’s all stable. And if you like the bit of wood that the treasure goes on, you can move it. There might be a beach, and you can lower it on to the beach. You can put the treasure into the dungeon (hold) and lock it away. They might be the baddies because they’ve all got bad teeth and goodies have good teeth. It’s got an anchor and a steering wheel. And the flag is like a proper flag. I couldn’t make a flag like that. I can do curves and circles but I can’t do skulls. I can say ‘ship ahoy’ though because all pirates say that.”

I’m pretty impressed too. It’s a big old boat and it even comes with a special ballast attachment that gives the bottom some weight so you can actually put it in water. So far I’ve managed to dissuade the boy from taking it in the bath but I’m sure I’ll eventually succumb. 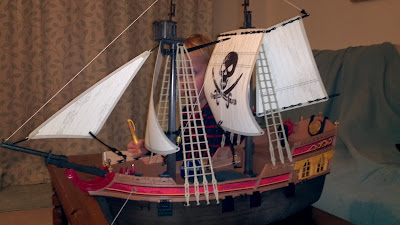 It’s five to nine in the evening and he’s up drawing pictures of pirate boats (or should that be ships), so I think I can safely say that he’s impressed.

The RRP is £49.99 but since it’s now discontinued, somewhere like Amazon is your best bet. I think it’s great value for money, it’s a big old ship and it comes with plenty of cannon and pirates. And for that matter a parrot too because what self respecting pirate doesn’t accessories nowadays? Theres a cargo hold, a removable deck, plenty of rigging (note to self: need to explain rigging to the boy, that’s what he’s referring to when he says special ladders for the sails) and adjustable sails too. Like all Playmobil it’s robust enough for an over excited 5 year old to play with too.

We spent half the evening with the pirate ship laying siege to our Playmobil Knights Castle, although I must say the Knights (me) were heavily out numbered and out gunned by the pirates. So much so, even the intervention of the elephant cavalry  judiciously borrowed from Fifi’s 123 Noah’s Ark, couldn’t turn the tide of battle in our favour.

I’m fairly sure he’s asleep now, perhaps I can liberate the pirate ship from his bedroom to have a quick go myself. For research purposes of course…