I had a conversation with wifey yesterday where she admitted she found it hard to connect with the boy on some fundamental level because boys are boys and quite alien to her as a girl.

It’s not a new issue, there are excellent books out there like Art of Rough-housing that deal with the different needs boys have to girls and how to address them, but they don’t really give you an insight into how the mind of little boys work. 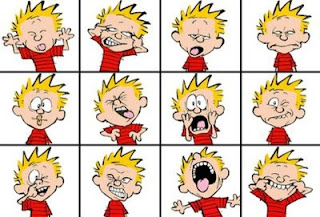 Calvin & Hobbes was a syndicated comic strip written over a ten year period between 1985 and 1995 by a chap called Bill Watterson. It’s generally considered one of the all time great newspaper comic strips because it’s very clever and works on several different levels. At it’s most base, it shows the adventures of Calvin, a 6 year old tearaway and his toy tiger Hobbes, at it’s most high falutin’ it deals with fairly complex theological and philosophical issues. After all John Calvin and Thomas Hobbes were a theologian and philosopher respectively.

Calvin is perhaps the best realisation of a little boy you will find in printed media.

There, I’ve said it. Now I will attempt to illustrate it! (Click on any of the images for a larger, easier to read, version)

If you have a boy, the 4 panels above should be utterly familiar to you. You are not alone, boys live in a world of vivid imagination and escapism. Understand this and you’ll be on your way to understanding boys too.

However you think your lad is getting on playing with toys, the actual play is probably more violent than you’d imagine. Boys have a lot of pent up energy. Think of them like a puppy or a dog that needs to be exercised to settle those aggressive hormones down.

The boy will happily have the same book (it’s the Poo Bus at the moment) night after night, in much the same way that he will watch the same film over the second that the end credits roll. It’s normal, he’s a boy. 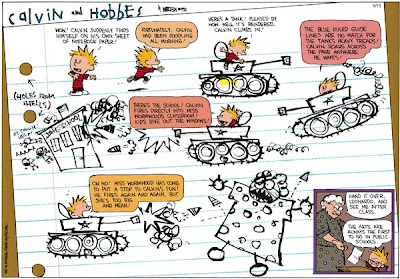 Boys don’t mean to get distracted, they truly don’t. They just don’t have a great attention span. It ties in with the imagination thing. I picked the boy up from school yesterday and he spent the whole walk home asking me to build a TARDIS for him.

However loud, rambunctious, obnoxious or daft boys can be, at the core is a sensitive emotional child, that has fears and insecurities that is often too well masked. A lot of boys keep soft toys close well past the point that girls give them up. I still have my Panda and I’m 37.
Finally, never underestimate the love and attachment a small boy can have for a soft toy:

I have evidence of this myself you know.

I can see so much of myself when I was little in Calvin and ever so much of the boy in him too. And I think that’s part of Bill Watterson’s genius. If you want to understand your little boy better, buy some Calvin & Hobbes, you’ll have a great time reading it and I guarantee it will give you a much better insight into little boys than any number of parenting manuals will.