Spending a few days with the Barnes & Noble Nook HD has taught me that beauty is more than skin deep, there’s more than one way to skin a cat and it’s entirely possible to differentiate a smaller Android based tablet from other Android tablets and not just Apples iPad.

The first thing I noticed about the Nook HD when I picked it up was how darn light it is. B&N have managed the neat trick of reducing the weight to next to nothing but at the same time managing to keep the build quality up- there is absolutely no flex in the device; it feels very rigid, which is more than you can say for a lot of the budget end of the tablet market. 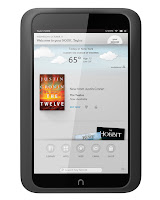 The back of the Nook HD is a soft touch plastic, which, combined with the size and weight, makes it very comfortable to hold one handed for prolonged periods of time. Even wifey with her diddy hands was happy to hold it one handed whilst wrangling Danger with the other hand. At 7 inches, it’s about the size of a trade paperback book and easily fits in a handbag or manbag. Ahem. At the front the screen is slightly recessed behind a white curved bezel, there’s a proprietary charger port on the bottom and a headphone socket on the top. The power button is on the left whilst the right has a volume rocker. Apart from the stylised “n” button on the front, that’s the lot because everything else is controlled via the touchscreen.

Talking of the screen, the first thing that springs to mind are the words “Good grief!”. The Nook HD has a resolution of 1440 by 900. That’s more than the Kindle Fire HD, the Google Nexus 7 and considerably more than the iPad Mini but the proof is really in the seeing and the screen is frankly astonishing.

The awesome screen resolution is designed to make reading magazines and books easier on the eye and from the selection of magazines we’ve looked at, this is definitely the case. They look a lot sharper and clearer than the equivalent magazines do on a Nexus 7 or an iPad. Because the Nook HD is tied in to Barnes & Noble in the same way the Kindle Fire HD is tied in to Amazon, the device is very easy to find your way around. It’s effectively designed to be used to consume media, be it books, film or magazines and since it’s designed to do this, it works very very well. The store is easy to find it’s way around, and purchasing stuff is simplicity itself. What the Nook does particularly well is kids books, the screen is easy for the kids to change pages with and the interactive elements are designed specifically to engage smaller minds. The only tricky element is getting the Nook HD back off your kids once you’ve introduced them to it.

The Nook HD uses it’s own App store, which doesn’t have the number of apps that Google’s Play Store does but you can find pretty much everything you need.

The Nook HD retails at £159, and I for one shall be sad to see it go back after Christmas!

I’ll finish with some actual screen captures-click on each for the full sized version.