The last bits of Christmas pudding were finally eaten last week and whilst the tree is down, it’s still looking for a permanent home and is sitting forlornly in pieces on the stairs in the interim.

Of course I’ve already waded through umpteen Valentine Day press releases (they came after the “New Year, New You” one’s which started mid December) but what really took the biscuit was walking into Iceland at lunch time to purchase a pot based noodle snack for lunch: 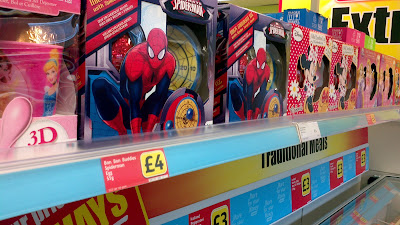 It’s a shade over two months until Easter. I know this because we’re going away at Easter and have just paid the balance of the trip and arranged house sitters for anyone who reads this post and gets any funny ideas. As soon as the sell off of overstocked Christmas goods has finished, the stores are moving on to the next excuse to sell targeted tat to us all.

I think the time line runs something like this, with the event days in red and the months they’re marketed in black: 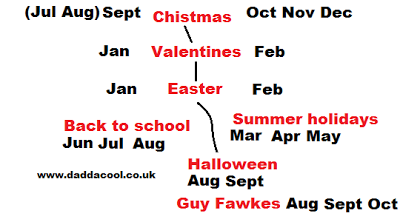 Basically there are only two months of the year, December and May, where you’re not going to get bombarded with two major promotions. It doesn’t help that the Christmas decorations and offers start as soon as the schools break up (Selfridges and Harrods Christmas stores open in July).
I can’t help but think that we’re always being induced to think of a “special day” that’s months off in an attempt to part us with some cash when we should be focussed on enjoying today.