It’s a rite de passage in our household to go sledging as soon as possible after your first birthday. For Danger it came less than three weeks after his first birthday. The snow started falling in earnest last Friday and continued pretty much all day. By Saturday morning when Fifi’s ballet was cancelled, we were almost waiting with all our gear on to descend on the park for some sledging fun.

In previous years we’d borrowed a sledge from some friends but last November I bit the bullet and bought one of these from Amazon. It’s pretty much the same as the one we borrowed and I have to say, these wooden sledges are much much better than the plastic ones. They go much faster, are sturdier but also and most importantly, keep your kids well off the ground. This means other kids plough into the sledge, not into your child. 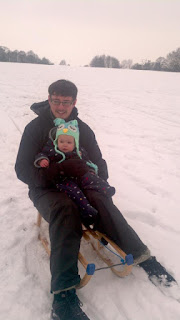 When we went down to the park at around 9am, Danger cried pretty much solidly in his pushchair for almost 45 minutes. Initially we thought it was the cold that was upsetting him but once I took him out of the puschair, it was pretty evident that the tears were due to imprisonment and not the temperature. Pretty soon he was zooming down the slope with me on the sledge!

We spent about two and a half hours on the slopes. The boy was indulging in his head-first at speed downhill pursuit, whilst Fifi was sneaking in two goes for the price of one. We only had to give in when the boy’s socks got too cold and wet in his ski boots to continue.

Danger loved the feeling of the wind in his face and was beside himself when he got to go back in the puschair. Impressed, he was not!