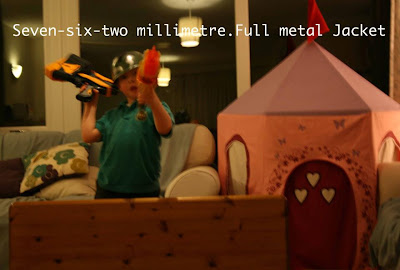 My birthday falls a scant 3 weeks after Christmas so traditionally it’s always been a bit of a damp squib. This year however I asked wifey for a NERF gun for my birthday and it turned into one of the best birthdays I’ve ever had.

We’ve built up a fair collection of NERF guns over the last couple of years. We’ve got a couple of Jolts, a battery operated 8 shooter called the Barricade RV10 and one with a “laser” (red LED) sight called the Nite Finder EX-3. For my birthday I was lucky enough to get the Speed Load 6 (special offer for £6.99 at the moment too!).

I was at work on my birthday but promised we could have a bit NERF battle once I got home and put Danger to bed. I had visions of him crawling across the sitting room floor being pinged in the cross fire.

Imagine my surprise when I came down from putting the little lad to bed, to find the boy had turned the coffee table on it’s side and set himself up in his “base” with the two most powerful guns and his plastic GI helmet.

Fifi and I hunkered down behind a couple of stacked wicker baskets and got to work. I have to admit, it was probably the most fun I’ve had so far this year and after half an hour we reluctantly stopped so we had time to make sure all the foam darts were collected up. We would be subject to a barrage of semi automatic and automatic fire, and would launch our counter offensive during his reload phase. I even managed to ping a few shots off his helmet. It was great.

I know people may have concerns about kids playing with toy guns. I played with cap pistols a lot when I was little and the arguments that ensued as to whether someone had been shot often lead to more violence than the games of cowboys and Indians portrayed. I’m struggling to think of a single one of us that’s grown up thinking shooting people with guns is okay, so I am happy to let the kids NERF the heck out of each other, knowing that they’re not being turned into NRA toting nutjobs.