Over the last year we’ve continued our theme of sleep deprivation that we’ve only had a brief break from since the boy was born almost 6 years ago. Fifi didn’t sleep through the night until she was almost 3 and then Danger came along a few months later.

The little fella is now one year old, and until very recently was waking up for a bottle two or three times a night- basically he was still in a new-born feeding routine that saw him up at 11pm, 2am and 5am. We’d talked about letting him cry and settle himself but unfortunately GEOGRAPHY got in the way.

The kids bedrooms run: the boy’s, Fifi’s, and Danger’s. The boy could sleep through the End of Times without waking up. He is the worlds heaviest sleeper bar none. I’ve got him dressed before without waking him up. When he’s older it should be on his CV: “International standard deep sleeper”. 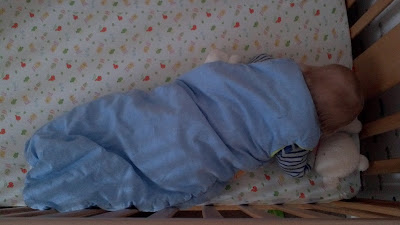 Fifi on the other hand is the worlds lightest sleeper. Only the other day she fell asleep in the car with both eyes open and I thought we were at the start of some zombie nightmare. Checking on her in bed at night is fraught with problems too, simply standing in the doorway is often enough of a disturbance to get her to sit bolt upright.

So we’d found out through trial and error that letting Danger cry a bit normally led to Fifi crying a lot, and she is just about the loudest little girl on the face of the planet (she goes up to 11), and pretty soon the whole house would be awake.

And so we lurch about in a sleep deprived state.

The last three nights though have been something of a minor watershed. Equipped with his Christmas themed two front teeth, and generally comporting himself in a more grown up fashion, Danger has been a bit knackered during the day and napped well, and we’ve just let him get on with it at night. So far across 3 nights he’s had one bottle per night in the middle of the night and Fifi has somehow stayed asleep. Well, perhaps Fifi has not made as fuss would be a better descriptor, as she did sit up and look at me the other night as I exited the toddlers room but the principle is firmly there.

Is this a turning point? Probably another of those false dawns that parenting is replete with. I do know that the kids sleep better in winter when it’s pitch black though, so we had better get this cracked before summer…