This week has been as ultimately depressing as any week can be in terms of politics and by implication living in the UK. 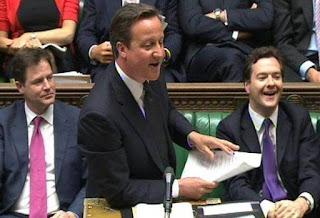 We’ve had Tory front benches laughing as they cap benefit rises to 1%, making the poor poorer, while the LibDems just bowed their heads and showed that their party colour of yellow runs all the way through them. I’m not going to write at any length about these effective cuts in benefit (they are below inflation, so that makes them a cut in my book) because they are despicable and any right minded person can see that.

The attack on people on benefits is multi fronted now, ATOS are persecuting the disabled (and leaving them in buildings potentially on fire), certifying recent amputees as fit to work, re-assessing those that are passed as unfit to work every six months until they lose the will to fight for the benefit they deserve, whilst those lucky enough to get passed as okay to remain on benefits are seeing those benefits cut.

I’ve heard tell that every single appeal against being declared fit to work has eventually been won by the claimant, which shows how stacked against the disabled the system now is. Of course, the boss of ATOS has recently had a £1m bonus. 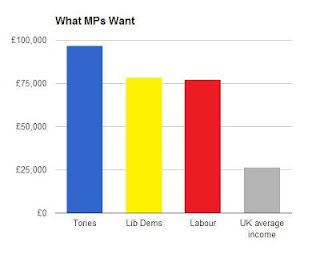 And just as a nice juxtaposition to this, we’ve had a survey of MP’s done to see what they think their salaries should be raised to. They evidently don’t think the public sector pay freeze extends to themselves. Before MP’s expenses (which are still very large), they are paid £65,738 at the moment, which would appear to be plenty in this time of austerity, wouldn’t you agree?

We live in an affluent area but right now, the roads are so poor, I try to avoid driving. Pot holes you can’t see the bottom of, cables exposed in streets that were surfaced a couple of years ago, and all of this in a mild winter that has seen very little frost to damage the roads. Bin collections are now more infrequent than doorstepping from the Rag and Bone man or the Jehovah’s Witnesses and pretty much any council service you try to contact have a labyrinthine automated system in the hope you’ll get disheartened and give up so one of the few people still working in local government doesn’t have to deal with you.

And this is only the beginning of the deterioration in local services- in theory we’re having the cuts on the back of a period of plenty, where everything was looked after properly and is now being left to go to seed. Imagine what the roads or services will be like in a few years time after a prolonged period of neglect*.

And yet if you look at some of the architects of this current situation, they’re doing okay:

It really is a case of the rich getting richer and just simply not being affected by the current situation isn’t it? Wouldn’t it be better to see the wealth a bit more evenly distributed? I remember reading earlier this week that in 2006 (the last year for published figures), out of the 56 billionaires in the UK, they paid £16m in tax between them. £9m of this was paid by James Dyson, who has the public stance of not trying to shelter his income from taxation.
Imagine a society where people and companies paid the tax that they should pay, not the smallest amount their clever advisers can get away with, so the vulnerable don’t have to suffer and services can still work properly.

*at least we wont be going hungry, the rat population will soar and it will be rat-kebabs, rat-atouille, and rat-au vin.