So Danger has finally taken his first steps and I’m elated but also a bit sad. I’m happy because he’ll soon be bombing it around with his big brother and sister, joining in properly like he obviously has been desperate to do for a month or so. But I’m sad because he’s the first of our three that I’ve missed the first steps for. 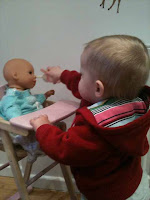 I remember vividly the boy started walking during the Wimbledon Men’s Final in 2008. I can’t remember who was playing but that’s obviously secondary to us. Fifi started walking on Christmas day 2009, three weeks before her first birthday. It looked for a while that Danger might start as early as Fifi did (the boy was around 14 months; he’s always taken his time over everything) but he compromised on a very upright knee shuffle, with his arms swinging around like a professional Olympic walker.

It’s also sad because he’s our littlest and isn’t really a baby any more. I do love the way we shuffles over on his knees, leans against me and rests his face in the palm of my hand. Sooner or (hopefully) later, he’s going to be as cuddle resistant as the boy has become.