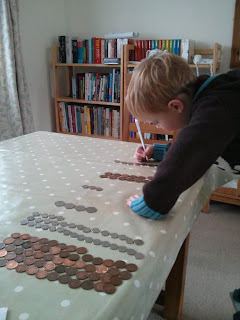 We’ve been working on the boys awareness of money over half term. Mostly because it’s on the National Curriculum and they’re going to have a test on coins and adding up but we thought it would give him a good idea of how much things cost. At the moment a toy is a toy to him, a £5 plastic Dalek doesn’t cost any more than a fifty pound video game.

So while Fifi and wifey were at a party and Danger was zedding away whatever evil bug he’d picked up, we cracked open the boys money box and began sorting the coins out into denominations. I left how to organise the coins to the boy but I did tell him we would need to be able to count them easily. Once he’d arranged them all (ironically ignoring the £10 note, thinking it was play money!), he set about counting them and making a note of how many of each coin there were. The 1ps won out, with 60 and despite being the second least numerous, with 4 coins, the value lay in the 50ps.

When I asked the boy which pile was worth the most, he naturally picked the pile with the most coins in it. To show him the comparative value of each coin, I piled up 50 1ps in a tower and put them next to a 50p, telling him that they were worth the same. After a bit of reflection and a furrowed brow, he decided the 50ps were the winners.

Then we were on to the discussion about what he could buy with it. He started off optimistically with some variant of the Skylanders game and ended up settling on a more realistic Doctor Who comic (he was equally happy with both and at times I’m convinced it’s the “getting” that’s important, not what’s “got”).

All in all, it went well, which just goes to show that you can trick boys into doing maths with the right incentive!