Or soccer as our American friends might call it. Either way, I’ve recently started playing 6-a-side again after a 6 year lay off. Last Autumn work started up an after hours session once a week after a long sabbatical. I’ve only managed to play 3 times due to various issues. 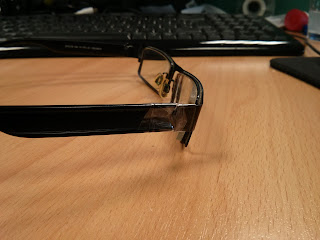 Last night however took the biscuit, crumbled it into dust and liberally sprinkled it all over the floor. While I was having a brief spell in goal, I took a ball in the face from about 10 feet away. (Un)fortunately my glasses took the brunt of the attack, the arm was bent and broken off, both nose pieces flattened to the lenses (cutting my nose in the process) and the frames bent.
12 hours later my face is still stinging.
So I’m off to ring the opticians and book an eye test, which, along with the cost of the specs is going to be an expensive lesson in not wearing my specs to play football. Seeing things clearly shouldn’t affect a player of my mediocre talents I suppose!