I remember watching Ewan McGregor and Charlie Boorman motorbiking across the Equator in Africa a few years ago. I marvelled at how good the road surface was and ironically commented that perhaps we needed to learn a thing or two from African road chiefs about looking after a strip of tarmac.

I made it into the local paper recently when I spotted a pothole outside a local frozen food supermarket that had bare exposed wires poking out of it- this road had been entirely “resurfaced” a scant three years past. If you see me on the roads swerving erratically, it’ll be down to emergency avoidance procedures to avoid potholes.

Seems like I’m not the only one who has this problem though, we’ve now had a high profile suspension collapse due to potholes in our town. None other than the President of the AA motoring association:

Reading the chaps twitterstream, he was fortunate in that his suspension collapsed whilst at a petrol pump, rather than on a roadabout or anything. How do we know it was in St Albans? Well I have my chum @mike_1727 to thank for this piece of clarification: 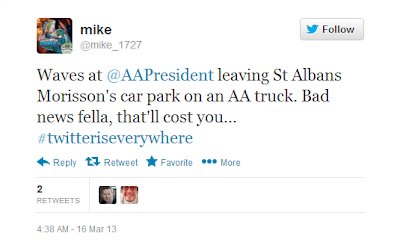 As the austerity cuts get deeper, we’re going to see roads get worse and worse. Sooner or later, we’ll end up with a society that walks everywhere because the roads will be impassable. Whilst it will do wonders for the obesity epidemic, we’ll regress to a feudal state where we view people from the next village with suspicion.