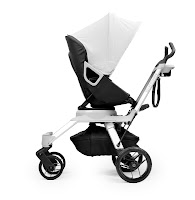 When Orbit offered me an Orbit Baby G2 (click for it’s very own UK website) to road test, it set me thinking. There are few things as divisive in life as your choice of pushchair. The problem is, for most people when you buy a pushchair, you’ve got no children and no clear idea what to look for. Even if you’re lucky enough to get a different one for baby number 2, you only learn from some of your mistakes. Baby number 3? Well you’re getting there.

We currently have 6 pushchairs and strollers in the house and we’ve had another 4 that we’ve bid a fond farewell to. None of them are perfect, so how did the Orbit Baby G2 fare? To find out, we were given a series of challenges*.

A normal day: Folding the stroller and putting it in your boot

As you can see from the video below the Orbit Baby G2 folds up very easily. There are a couple of clips that push forward and STAY PUSHED FORWARD, and then all you have to do is twist the central bar with one hands whilst the Orbit Baby G2 pretends it’s Optimus Prime, leader of the Autobots, and transforms from a large pushchair to a very small folded frame with absolutely no effort whatsoever. It is actually possible to collapse it whilst holding the recent incumbent of said pushchair too, which is no mean feat. This makes it very easy to put in the boot. Another part of the magic is the portability of the storage compartments. The Orbit Baby G2 eschews a fixed basket under the seat in favour of a detachable baby and side panniers (an optional extra). You can leave all these fully loaded and just remove them and pop them in the car. It’s brilliant. Talking of cars, the Orbit Baby G2 fits in the boot of our Vauxhall Zafira very easily to boot (see what I did there?). Challenge passed with flying colours I think you’ll find!
Health kick: Taking the Orbit off road e.g. walking on rough terrain
We are inherently an outdoor family, which is great but also a shame given how terrible the weather has been so far this year. So Before I really deal with the challenge itself in detail, I should mention the rain cover. It’s a £50 optional extra, which is pricey, but it has one massive advantage over traditional raincovers- it’s as sturdy but about a quarter of the thickness. This means it packs up pretty small and doesn’t fill the entire under seat storage. What a novel idea eh! 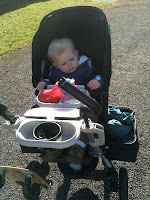 The route to the park for us has recently been transformed into something akin to the set of Death Race 2000. The nice path down the side of the Roman walls has been dug up, relayed, gravelled and speed humped and divided into two to allow cyclists to bomb it down on the pedestrian side and nearly kill small children. The Orbit Baby G2 deals with this well but more often than not we just offroad across the playing fields instead because it’s safer and I will eventually do a stretch for murdering one of the speed freaks that is going to kill a child one of these days. The suspension is subtle but absorbs a lot of the bumps in the pavement and the potholes in the road that are part of modern life now. So much so, a certain little chap went to sleep despite all the bumps!

Out & About: Taking the stroller on public transport / escalators / airport 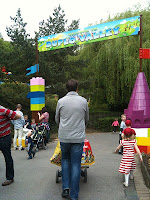 It’s bizarrely difficult to get on a bus on our estate because the drivers will only accept two buggies on at any one time and by the time that they make their way to our stop, the buses are often quite full. So instead, we decided to take the Orbit baby G2 to LEGOLAND for the opening of the new Duplo Valley and see how it coped with the stairs, the cable train and the general crush. The actual buggy itself is remarkably light for it’s size and we’ve carried it up stairs with little or no effort at places like LEGOLAND. The shape of the Orbit Baby G2 is such that picking it up does require two people; some of the other buggies we have are a one man job, but it’s more to do with the shape than the weight. Thanks to the really great cable operated brakes, I was happy to leave it with Danger in on the descent via cable train to the bottom part of the resort. It’s narrow enough to go through the train doors with little effort and quite short too, something that was a benefit when we look the elevator up to the 1st floor of the Star Wars shop, hunting for a bargain.

Socialising: Take the Orbit out for lunch with the lads

I like gadgets and one of the very cleverest things that the Orbit Baby G2 does involves the adjustable seat. A lot of strollers have an adjustable seat that can face forwards or backwards but the Orbit Baby G2 has another trick up it’s sleeve, it also faces 90 degrees in either direction. The idea is you don’t have to worry about the restaurant you’re at having a (suitably clean) highchair because you can just wheel the Orbit Baby G2 up to the table. We tried this out over a fried breakfast at the Secret Cafe on George Street in St Albans and Danger loved it, along with some scrambled eggs and toast of course. It also meant we didn’t have to strip the buggy of all it’s valuables and leave it outside, which is another important consideration.

Babysitter / grandparent challenge: Can they dig it?

We constantly bewilder our parents with the variety of buggies that appear and disappear from our house but if there was ever a buggy aimed at Grandads, this is it. The adjustable handles did my dad all sorts of favours, he’s tall and currently has a slightly iffy back. Being able to push his grandson in a fairly upright position made a lot of difference. They even had a bit of a chat (and maybe blew a few raspberries at each other but that’s between them) on the stroll we took. It’s nice being out with the family without being utterly in charge (although obviously fundamentally we still are), and seeing someone else push the littlest around is still a bit of a novelty.

All in all then, I think the Orbit Baby G2 passed the challenges with flying colours. If you don’t believe me or want to find out more, you can watch the video below, which includes a proper outside broadcast from the Secret Cafe!

The Orbit Baby G2 is available from lots of retailers, including John Lewis.

*imagine this entire paragraph being read out by Jeremy Clarkson and someone handing him a white envelope with some challenges in at the end. It’s not what happened but it adds to the excitement.