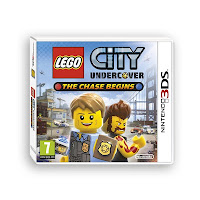 It’s usual for games to appear on a number of different formats to maximise the potential audience but the latest game in the LEGO franchise has taken a novel twist on this. The rather excellent Wii U game LEGO City Undercover, as reviewed by yours truly a month ago, has been complemented with a Nintendo 3DS prequel called LEGO City Undercover: The Chase Begins, which follows the rookie career of Chase McCain, a future MAVERICK cop, and star of the Wii U game. And fittingly, the first mission involves donuts. After that? It’s gang related stuff, with Rex Fury making his eventual appearance. On a rooftop.

The first mission really answers the question of whether the developers have managed to shoe horn the same humour into the 3DS version that fills the Wii U version to the eyebrows. Yes, yes they have and it’s still great fun! The 3DS has never had a game that’s pushed it to the limits quite as much as Lego City Undercover: The Chase Begins- the 3D effects looks utterly compelling, and even if there is a bit of fogging/pop in caused by the amount of stuff the 3DS is throwing around, it really doesn’t distract from the game in the slightest. 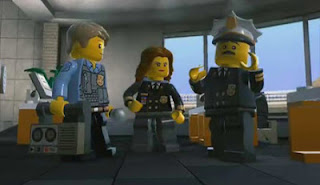 Whereas the Wii U version surprised me by having everything spoken, which is unusual for a LEGO game, the 3DS version returns much more to the norm by having subtitled conversations for the most part, with only the cut scenes voiced. If you’ve played any other LEGO games, you’ll immediately be completely at home, with one fairly major difference: in keeping with the sandbox feel of the Wii U version, rather than partitioning the game off into different levels accessed via central hub, the whole city is open. Or at least it is once you unlock some parts of it via completing missions.

It is incredibly good fun and a real work of magic has been done to cram everything into the diminutive handheld without compromising the experience. I’ve bounced on trampolines, been down zip wires, rescued dogs, dressed up as a burglar and done a little bit of breaking and entering and practiced my safe-breaking, yet I feel I’ve hardly scratched the surface. It’s full of neat little touches and I found myself impressed at small things, like all the vehicles handling differently or the Matrix style fights I got into with the baddies. Aside from the main missions, there are a myriad of smaller tasks to carry out, all of which help you towards the magical 100% complete target.

I get the impression that with it’s shorter, more contained, missions LEGO City Undercover: The Chase Begins is an idea pick up and play for a few spare minutes sort of game. It’s already comprehensively broken my addiction to Candy Crush, which can only be a good thing.