When someone invites you to a trendy converted bus station for beers, pizza, more beers, and a play with some Harman Kardon, JBL and AKG products, it’s a bit of a no brainer, especially when you’re one of ten dad bloggers invited.

So I said yes, hopped on the train to Ravencroft Park and met up with a load of top blokes for an evening of entertainment. Luckily enough I knew (even if I hadn’t met in person) 8 out of the other nine dads. The only gent I hadn’t met was Stokey Dad and since he has a section called “Daddy Cool”, he’s alright with me anyway.

In between rating people on how close they resemble their twitter avatar picture and catching up, we had a lot of audio equipment demoed to us by a very nice chap from Harman Kardon. Fortunately all bar the AKG headphones were BT, so when the chap demoed everything with Adele, I snuck a connection to one of the devices and blasted Ace of Spades out over it. And I would have gotten away with it if it wasn’t for those pesky PR types! It was quite good fun as we all played our music collections over the BT speakers, daring each other to judge us. Personally, I blasted out the Who’s Baba O’Reilly and a bit of Megadeth as well as B&T Overdrive. I also accidentally stumbled onto the world of all female cover bands, when I put on Lez Zepplins version of Kashmir.
We saw a lot of stuff but two or three items really stood out for me. And so in no particularly order we have… 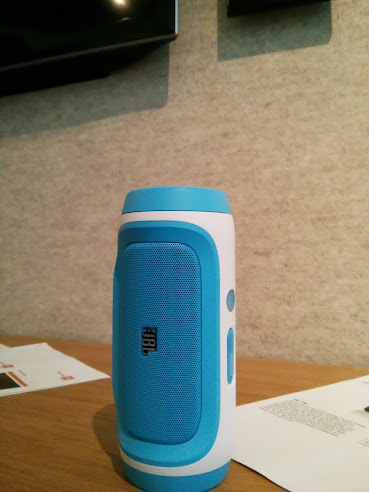 The JBL Charge is an interesting spin on a bluetooth wireless speaker. As well as being pretty funky in terms of colour and chunky design, it also comes with a standard USB port that allows you to plug in a cable and charge your phone when you’re out and about. Considering it has a 6000mAh battery, which can power the speaker for 12 hours of play back, charging up a flat battery on an iPhone 5 (battery capacity of 1440mAh) should only take about a quarter of it’s juice, so you’d still have 9 hours left to play some funky tunes. But that’s all nice and stuff but how does it sound? Well that’s the surprising thing, the JBL Charge is a small device but it punches well above it’s weight- 2×5 watts to be precise. It’s good, Bachmann & Turner Overdrive awesome in fact. And yes, I did play You Ain’t Seen Nothing Yet as loudly as it would go and yes, the chap from Harman had to turn the volume down manually when he wanted to talk about the next device. Despite the volume it’ll go to, the JBL Charge doesn’t distort at all. How d’you like them onions eh? I was pretty impressed with the JBL Charge myself but…

…The AKG 551s completely blew me away. They’re an over the ear pair of closed back headphones (they cover your ears and don’t leak noise- probably a favourite with Adele fans who don’t want to let the whole world know what they’re listening to) that manage to have great sound fidelity along with a more than reasonable price (£199). I happened to have my pair of £260 ‘cans with me just in case I got the chance to do a direct comparison. I’m fairly pleased with my pair, I won them in a competition and as far as on ear jobbies go, they’re the best I’ve owned. The best I’ve owned full-stop were a pair of Shure Ec3’s that more or less resided in your ear canals and sounded awesome but after 5 years use, the cable died and the replacement model was about £400.The AKG 551s are much much better than my (more expensive) pair. Whereas the trend with mid to high end headphones currently is excessive bass to the detriment of pretty much everything else, the AKG 551s sound very unadulterated. They’ve got power, but a crisp clear sound to boot.  I was so impressed, I’m going to grovel to borrow a pair for an extended road test with my FLAC rips of Pink Floyd. 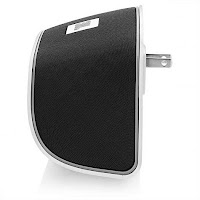 Finally, and by no means least, those nice chaps at Harman Kardon kindly gave us each a JBL SoundFly BT (RRP £149) to take home. This is a diminutive mains powered bluetooth speaker that has to be heard to be believed. We have a couple of Sonos PLAY:3’s in the house which have great sound. This costs less and is about a third of the size but once it’s run in (about 20 odd hours of music), it runs the much larger devices pretty damn close. It’s design is clever, it just plugs into the wall, making it ideal for use in the kitchen or the garden. In common with all the JBL products we saw, the sound is pretty uncommon for something in that size and price range. I’m used to hearing poor audio quality and distortion at volume from product at this sort of range but the SoundFly BT again beats expectations. It’s ideal for holidays too, since you can just plug it in somewhere and really irritate your kids by having the same music you bore them to death with at home on holiday.
Keep your eye out for some more JBL/AKG/Karman stuff, I’m intrigued.