Back when sci fi wasn’t trendy (and Bishop’s definitely didn’t love sci fi), I was a buck toothed Doctor Who fan to a degree that even our 6 year old with his self built shrine couldn’t aspire to. Watching Doctor Who was one of the few things I can really remember doing with my dad when I was little. Don’t get me wrong, I’m sure he did stuff with us all the time but I don’t remember a lot of it, I’ve got a bad memory like that. Aside from watching Doctor Who, I do remember being sent on patrol up and down the beach with my brother when I was probably 7 or 8, spotting the topless sunbathers. I’d report back to dad and about 5 minutes later he’d stroll off to get an ice cream. 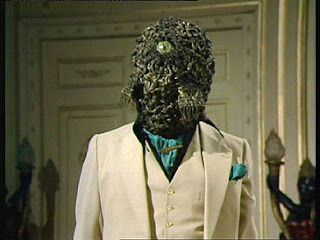 The earliest discernible memory I can put a specific date to happened on 29 September 1979. I was four years, 8 months and some days old. It involved Scaroth, last of the Jagroth, ripping off his latex mask to show his alien vizog. Let me tell you this, in 1979 at the age of 4 years, 8 months and some days, that was pretty terrifying I can tell you but it lead to a life long love of Doctor Who that the new stuff hasn’t completely managed to destroy.

Without wanting to seem like I’m grasping to find a silver lining on the worlds largest raincloud, the great thing about Doctor Who back then was the fact that they simply didn’t repeat it. Series 17 was originally meant to be 26 episodes long, so that’s half the year and with each story spanning several episodes, there wasn’t really the time to repeat it anyway. That’s how I can be so specific about when I saw one of my earliest memories.

I was a proper behind the sofa fan too, because it had the capacity to be quite scary. Watching some of the older stuff recently, some of it was pretty scary and certainly dealt with incidental character death a lot more than the newer stuff. But I don’t want to get into a discussion about the differences between the two, the reboot is good and bad in it’s own way, as was the original.

Given the lack of repeats and VHS tapes (never mind DVD, that was years away), I consumed the Target paperback novels with a single mindedness that would have made a Mastermind contestant proud. In fact when someone had their specialised subject as Doctor Who on Mastermind waaaay back when Magnus still presented it, I outscored them comfortably. Of course the young idiot savant (maybe without the savant part) me scored zero in any of the general knowledge rounds but that just goes to show how well I knew my Who.

Things are different now of course. In the pecking order of absolute knowledge on Who, the internet is the great leveller. When I learned about Doctor Who as a kid it was from books, research and the Doctor Who Monthly magazine. Nowadays you can sit and memorise a wiki if you want to. But I bet not many people have a copy of this sitting around at home:

Bear in mind, at the time I bought this, I wouldn’t have had any method of propulsion other than push bike and no realistic means of getting to any of the (private) quarries where a lot of the outside stuff was filmed. It was just the sort of thing I had to have though. Nowadays the collectables market is designed to milk as much money as it can out of people but back then licensing was very different. I don’t think a meaningful Dalek toy came out until the 1990’s when Dapol did a crappy range of figures.