We’re a pretty active family when we go on days out, whether it’s yomping round the RSPB HQ up in Sandy or trekking across the sand dunes in Holkham, the general tendency we have is to be out and about come all weather. With the kids ranging in age from one to six, this invariably means we have to take a stroller of some sort with us, and I often end up with one of the bigger two on my shoulders.

If you read the blog at all, you’ll have seen a lot of pushchair reviews on it over the last 4 years, with even more on wifey’s Being a Mummy blog. We now know our way around pushchairs/prams/strollers pretty darn well.

So when BOB (not the Blackadder character) offered us one of their all terrain strollers, the BOB Revolution SE, we jumped at the chance. Our current off roader is a bit long in the tooth and has an iffy front wheel. 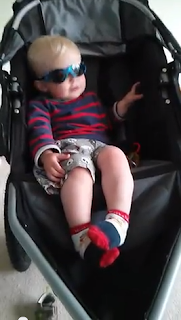 It arrived whilst I was away at the tail-end of last week, so it’s not really ready for a proper review but I thought I’d post a picture of Danger enjoying it and give some initial thoughts. The BOB Revolution SE is bigger than our existing off-roader, an Out & About Nipper 360 but better for the increase in size. It has pneumatic suspension, which actually works, a two stage collapse mechanism that is a cinch to operate and (best of all) it’s underneath storage is high enough off the ground to clear the curb when you go up and down the pavement. I’ve lost count of how many bottoms we’ve worn out by constantly grazing them on the curb.

Best of all is probably Danger’s reaction to it. He’s happy in it and actually seems keen to climb into the BOB Revolution SE when it’s sitting around the house. Normally we have to wrestle him into the pushchair because he doesn’t want to go in it but he seems to have taken the BOB Revolution SE to heart. Encouraging signs.