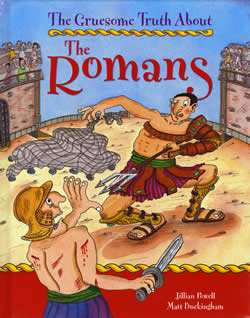 Last nights bedtime story was a factual book selected by the boy. It was a Matt Buckingham illustrated book called The Gruesome Truth About The Romans. As it was fairly text heavy and had some complicated ideas to get across to a six year old, I opted for the double page spread on crime and punishment since it seemed rather apt given how naughty the kids have been recently.

Beheadings, with bodies being flung into the Tiber and heads dumped in the sewers, beatings with sticks, crucifixion, sewing people up in a sack with a monkey and then drowning them both, the book had the lot but the boy was fairly unimpressed. That was until I decided to show him how we could adapt one of the particularly gruesome punishments to our everyday life.
You see the Romans used to tie criminals to a post in the Colosseum and let wide animals eat them in a sort of warm up to the normal action. This in itself didn’t elicit a reaction but when I suggested we substituted the criminals for him, the post for the whirlybird washing line and the wild animals for our chickens, the threat was suddenly bought home nicely. All our hen’s will do is give you a bit of a pecking but that’s enough for a fair degree of terror in a small boy.
Job done, thank you very much Romans!