I know from reading twitter that some people use filters to block out what they see as the excessive social chatter over certain reality TV “talent” contests on a Saturday. In fact I remember chuckling at the weekend as one person forlornly commented that their twitter time line was almost empty as a result of the self imposed filter.

Well guess what, the clever boffins at Virgin Media, along with help from beardier boffins at the London School of Economics, have looked at a combination of TV viewing figures and social media engagement to produce an algorithm that ranks TV shows out of ten in terms of engagement. And interestingly, the shows with the biggest audiences don’t necessarily produce the biggest social media interactions. 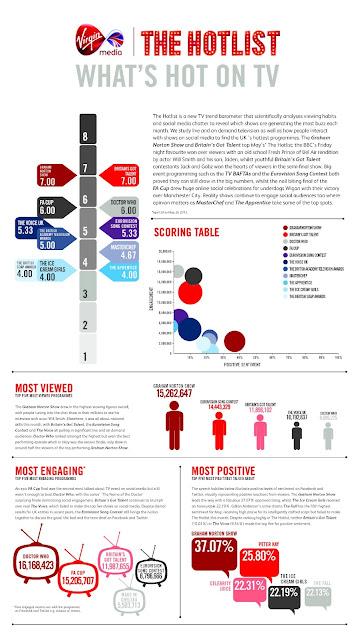 As a long time Doctor Who fan, I was pleased to see it’s apparently more engaging that Britians Got Talent (somewhere, just not on this show eh?)

Viewing figures has long since stopped being the be all and end all, so it’s interesting to see another take on what makes the hottest TV.

disclaimer: I got sent the infographic and it was interesting enough I thought I’d publish it. No monies have changed hands and unfortunately Richard Branson hasn’t offered me a free trip on Virgin Galactic either.