I remember it well. I must have been in my early teens and I had already sussed out how to programme the top loading VHS video recorder to record all the cheesy 60’s Hammer Horror films off the telly. They were delightful- hammy as hell but it was a more innocent world when they were made and for me when I was watching them. They were scary in a good way too, little shocks, and gothic creepiness that never lingered past the final reel when Peter Cushing usually disposed of the monster in a satisfying manner. 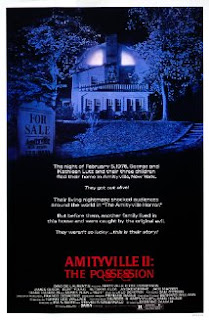 Then I made the mistake of videoing Amityville II the Possession. As an adult I can see it’s not a very good film. It’s a sequel to the film adaptation of an interesting book, one we did for our book group once actually, way back in 2010, but goes for the schlock horror approach rather than anything particularly eerie. But since it was filmed in 1982, well past the advent of the slasher, it’s an entirely different sort of film to anything Hammer made. It’s not a particularly good film, IMDB readers give it a 5/10 but for an impressionable young me, it was bloody scary and induced a few nightmares.

Of course that’s not what properly terrified me. Oh no, that would be too easy really. What got me into the proper realm of light headed, heart pulsing, blood thumping through my head like it was going to explode terror happened a few months later.

It was an ordinary evening in every single way. I watched a bit of telly, went and had a shower (and since I was a hormonal teenager, probably bashed one out too), then went to bed to read my book for about half an hour or so before going to sleep. I don’t remember the book I was reading but as it was probably 25 years ago, I’m sure you’ll forgive me on this one. About two chapters into my reading, maybe 20 minutes after I’d settled down, my wardrobe doors flung open and this thing hurtled out towards me roaring like something from beyond the grave. I’d love to say I sprung to my feet and dispatched it with a swift kick to the crutch (as Lister once said, “One swift knee to the happysacks, it’ll go down like anyone else”), but I shrieked like a 5 year old girl and barely stopped short of soiling myself. There are few times in my life I’ve experienced proper terror and I don’t think a single one of them has come close to that. It was a proper primordial fear of the unknown and it nearly did for me.

Hats off to my little brother, who had crept into my wardrobe whilst I was in the bath, and bided his time for what must have been approaching three quarters of an hour before hurling himself at me. That was proper class and I think I’ve forgiven him for it.

The kids are still a bit little to be exposed to much that is properly scary. The boy, in true family tradition, has made it part way through the opening credits of The Nightmare Before Christmas on each of the last three Halloweens, and still occasionally has nightmares about Davros from Doctor Who. He’s a huge Doctor Who fan but I have to pre-watch the episodes to make sure they’re not too scary for a six year old. It’s funny because Doctor Who is more shallow and lacking in depth than it’s ever been, so in theory should be completely suitable for little kids (it’s finally become the kids show it has always been in danger of becoming) but on occasion something nasty or spooky pops up that’s not really okay for such little ones.

I think the only thing that’s properly terrified Danger happened at the British Museum. He was pootling around the Pompeii exhibition under his own steam, walked up to a person he thought was his mummy, and then realised it wasn’t her and that he couldn’t see her. He promptly burst into tears and was shaking when I picked him up.

Still, at least we don’t have a video recorder in the house any more. I’ll just have to make sure I stay one step ahead of the kids when it comes to implementing content filters I suppose!