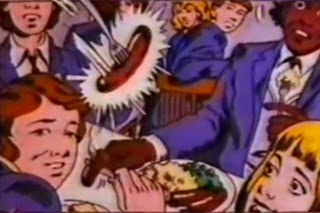 I have several actual issues with this though, mostly focused on the food rather than the ker-ching opportunities for schools or catering organisations. Firstly the school dinner portions at our kids primary school are far too small for our kids appetites. When the boy used to have a school dinner as he started reception, he came home afterwards and immediately had a second lunch. And there is no option for a second helping (not even employing Oliver Twist style please sir can I have some more tactics). Neither of our school aged kids are tubby but they are very active and burn a lot of energy. They walk or scoot to and from school, and trips in the car only tend to be taken when necessary. They often cover two or three miles a day easily.

Secondly, looking at the menu for the final 3 weeks of term, the kids can have jacket potato 10 out of the 15 days, with pizza & hotdogs filling up 2 of the remaining 5 days. That’s hardly inspiring and whilst the kind of healthy pack lunch wifey prepares probably costs as much as the £2 school dinner, at least we know where the meat has come from. Horsemeat was found in a few school dinners up in Lancashire, so the quality is not as great as the song and dance has suggested, even given the massive improvement in the quality of school dinners in the last few years.

Looking again at the menu, there is too much reliance on chicken and turkey, which can be raised very cheaply if you’re not adverse to a bit of animal cruelty. We only eat chicken when we’re happy of the ethical provenance of the fowl.

Rob Rees, chairman of the Children’s Food Trust, said his own children preferred school dinners, but added some parents feel they are expensive. He said, “They absolutely love it. It’s not the school meals of the past. It’s wonderful fish pies, bologneses, lasagnes.” No mention of the fish fingers, turkey burgers, sausage rolls or hotdogs there.

I’m in no way picking on our school, I think the menu they provide is in keeping with the vast majority of schools but our kids school does go the extra mile and put the menu on it’s website in PDF format so parents can download it. Looking at other local schools, they don’t do this, which is a shame and makes it harder to pull examples from other menus. This romanticised idea that kids are wolfing down kelp burgers whilst looking forward to steamed fish on a bed of flax seeds on a Friday is nonsense. Yes, the turkey twizzler has gone, no it’s not much better than I’d put in a packed lunch. You only have to look to the lovely Pippa’s packed lunches if you’re stuck for inspiration. It’s not difficult.

I think a much better approach is to police what goes into a packed lunch if the government are worried about the quality of food kids are having for lunch. It’s something our kids school does and it shouldn’t take too much common sense to implement something like this. We’re lucky in a way, at our kids school the packed lunch kids get to go in first, so they don’t spend half their lunch queuing for a school dinner. This means the boy wants to have a packed lunch and Fifi has just announced she wants the same.