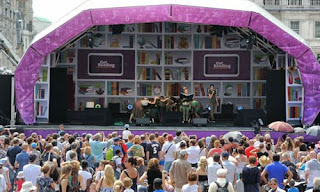 On Saturday 13 July we strolled around a completely baking central London to Trafalgar Square, for the free Get Reading kids book festival, which was sponsored by Barnes & Noble, the book retailing giant. I’ve reviewed their Nook devices before and am the proud owner of a Nook HD+, so when they pointed me in the direction of the festival I was happy to go along, even though the temperatures were excessively high. 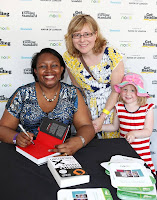 Trafalgar Square was completely closed off, Nelson’s Column has a large stage next to it, with readings/performances compared by those two lads of the gogglebox- Dick n Dom (sort of a modern day Ant n Dec as far as I can work out). Wifey even got to meet Childrens Laureate Malorie Blackman.

And the kids got to meet Peppa Pig, the Cat in the Hat and Warhorse. Which they found more impressive than Malorie Blackman but what do they know?

The main aim of the event was to fundraise for Beanstalk and raise awareness of the issue of child illiteracy in London. With 1 in 8 children nationwide leaving primary school behind in their reading, these problems are exacerbated in the capital.

NOOK donated 1,000 eReaders to Beanstalk’s reading helpers and sponsored Saturday’s unique readathon, at Trafalgar Square, which is good for them I say.