A little squeak was emitted earlier this week as Ouya finally sent me one of their dinky little consoles to play with. Hurrah! For those of you that have never heard of Ouya, they’re a kickstarter funded indie console making. A little over a year ago, there was no Ouya, so to get from nothing to a product under your telly in that sort of timeframe is a pretty spectacular achievement in itself. 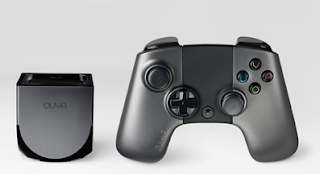 The Ouya treads an entirely different path to the likes of the mighty Xbox and Playstation though. Rather than being a home powerhouse, with enough graphical grunt to do amazing things, it’s built around the mobile operating system Android, and one of last years top end mobile system on a chip, Nvidia’s Tegra 3. There are a few Android games out there that look very tasty, and Nvidia reckon by the time they release Tegra 5 or 6 they will be up to Playstation 3 levels of power.

The Ouya retails for £99 here in the UK, and comes with a controller. As a point of reference, you can get an Xbox 360 for £145 and a PS3 for £139. The big difference in cost will theoretically come in the games, as Ouya games are priced on existing app store prices. Ouya does have it’s own app store mind you, although with a bit of faffing about, you can “sideload”* other android programmes and games.

You’ll be delighted to know I’ve not shot an unboxing video, because that’s silly but I would point out that some of the little bits of cellophane attached to the Ouya itself are a right pig to remove. The device itself as you can see from the photos is tiny. It does have a built in fan that whirs a bit but we’re not talking Xbox 360 take off style noise, so it’s all good. One concern is how hot the device gets when it’s running; considering the innards are more often found on a mobile phone, which is shipped in a much smaller package with poorer cooling, I was surprised how hot the Ouya got. Aside from that, the console itself is sturdy and has a feel of quality about it. The controller, less so. Some of the buttons feel a bit spongy but since the device supports dual shock 3 controllers (connected via cable or bluetooth), that’s less of an issue. 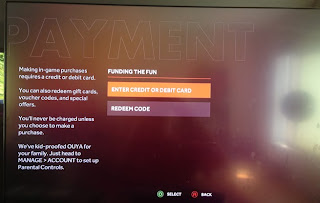 I wish I had good things to say about the set up process but it’s an enormous faff. I kept on getting generic error messages like “failed to connect to server” when what it actually meant was “your password is shorter than the 8 character minimum we didn’t tell you about” or “your card details are incorrect, please check them”. On  the subject of cards, I find it almost unforgivable I’m not allowed to complete setting up my device without entering credit card details. You don’t need to enter them to set up an Android phone, so I don’t see why I should have to enter them to set up an Android based console either.

The Ouya store (yes, it has it’s own walled garden store) is a little bit confusing and very colourful. there aren’t a huge number of games available as yet but people have had success sideloading games on to it. Sideloading can most easily be done by the Ouya web browser, and this is how I installed XBMC (a media centre programme). This highlights another weakness of the Ouya though, the browser is pretty duff and there is no onscreen indication that a download is happening. Likewise, things that you’ve downloaded are hidden away somewhat.

Still, I managed to get XBMC installed and watched some high definition video streamed from our NAS box with no issues other than a couple of crashes in the navigation/set up of XBMC. It’s not been fine tuned for Ouya just yet but a new version is out soon. There are other media streamer applications available, Plex for example, that work just fine.

So my initial thoughts are a mixed bag really. It’s a great piece of physical hardware that gets a bit hot and has already been left behind in the annual hardware cycle by this years crop of mobile phones. However it works seamlessly as a media streamer, and with a bit of faffing about will play a lot of fairly entertaining games. Once I’ve had a pop at some of the games, I’ll let you know what my thoughts are on those. The user experience needs some serious work to make it as user-friendly as it needs to be for the device to break out of the niche market it’s carving for itself. Given how much you can spend on a media streamer (£50-£100), the Ouya isn’t bad value for money, it just needs to be less of a fight to use the thing.

*normally games are installed onto an Android device via a store. However, you can also install programmes directly from the file. These files have the extension .apk. Some developers, like XBMC have the .apk files available for download on their website, otherwise you can extract them from your phone by using an app like Apk Extractor and email them to yourself for installation.