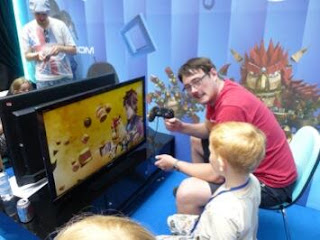 On Saturday the kids had to drag me kicking and screaming up to London and force me into Sony’s swanky London HQ for the summer Playfest; a chance to play all things Playstation, from the PS1 & 2 in the retro corner, to the Vita and PS3. And oh, I might have nonchalantly had a go on a PS4!

It’s 17 years since I first played on a Playstation but it seems like yesterday. F1, Micromachines V3, Resident Evil, Tekken, and eventually the Gran Turismo franchise, we played and loved them all back then. Right now though, it’s a great time to be little and growing up because gaming has never been so good.

Our two eldest (6 and 4) are just progressing from touchscreen simple puzzle games to the proper full on experience on home and portable consoles. Yes, I like a bash on my smartphone now and then but I’m not going to pretend that they offer the full fat gaming experience. A touchscreen is never going to be as accurate as a proper controller so for that reason, I’ll always have a soft spot for actual games.

Sony had some existing titles and some brand spanking new games on show, and the ones that wowed were a mixture of the two really. Fifi was completely entranced by Flower, a simple but pretty puzzle game where you guide a fluttering cloud of petals around to open other flowers

It’s such a gentle game, I couldn’t help but be drawn in myself. The boy on the other hand had vanished off to play Little Big Planet Karting. Sitting in a real kart, with a motion controller in a steering wheel add on. He was in his element. And it was only when Fifi threatened a full on meltdown he stopped and grudgingly let her have a go.

I snuck off to have a go at PES 2014 (about 75% complete) whilst the kids played Epic Mickey 2 and Jak and Daxter on the Vita. The Vita is ideal for kids since it’s got a touch screen but proper controls too. Ours are getting better and better at platformers, and really love Rayman Origins, so when I can get my mitts on Raymen Legends, they’ll be on cloud 9. PES 2014 looked pretty good on the PS3. I must admit I’m more of a FIFA fan but this current version of PES is pretty playable and runs smoothly. It will be interesting to see what it plays like on the PS4.

But the highlight of the show for me must have been getting my hands on the PS4 controller and having a go at the demo of Knack. I must admit I stood there impatiently tapping my foot as some kid played the entire demo all the way through, with his dad acting as gatekeeper to stop the enormous queue intimidating him away from the console. As if! *Ahem*

The new controller has a touch panel a bit like a laptop trackpad on the front and I had initially thought this would distort the shape and make it uncomfortable but my fears were unfounded. The controller sits very comfortably in the hands, so there are no complaints there. Knack also looks pretty. It’s not a game aimed at grown ups mind you, so it doesn’t show (or at least the demo didn’t show) the consoles flashy graphics too much. But what was on display was very smooth. The game itself was good fun, as you can see from the trailer:

So those were the games that stood out for me and the kids. There were plenty more- two Invizimals titles, and loads of seriously cool stuff for the Wonderbook. Unfortunately the Wonderbook stuff, particularly The BBC tie in Walking with Dinosaurs, proved so popular we couldn’t get a look in, which was a shame.

If you only watch one video, have a shufty at the Walking with Dinosaurs one, I challenge you to keep any small boy (or girl) away from it.