The hot weather reminds me of the BBQ we had at our first house to celebrate moving in. It was the house warming party to end all house warming parties really. You know, the sort of thing that you can only do BC (Before Children). At the time we had a cheap and cheerful BBQ that wasn’t even particularly well screwed together but we filled it up with charcoal and did enough burgers, sausages, chicken drumsticks and haloumi to feed me and twenty odd people of normal appetite. Once the BBQ had died down and the beer was being consumed to a truly epic style, we decided to chuck on all the old dead wood that had been sitting around in piles in the garden when we moved in. We turned the BBQ into a raging inferno and as is typical in these “campfire” type situations, a guitar appeared as if from nowhere and before I knew it, the few remaining hardcore revellers were toasting the sunrise with brandy to the strains of Stairway to Heaven. No party I’ve ever hosted or been to has come remotely close to this one in terms of awesomeness.

That BBQ died a few years ago- I lit it, piled on some more coals and the bottom promptly fell out. This was a nuisance as I wanted to use it. Still, with little kids it was probably for the best as traditional BBQ’s hold their heat for absolutely ages. We ended up buying a gas BBQ, much like the Littlewoods gas BBQs you can get for next day delivery. They might not have quite the pyrotechnical display of our old charcoal jobbie but they are a heck of a lot safer with kids. They also have the added bonus of being instantly capable of BBQ’ing food, something with our lack of planning is more than a bit handy.

What about my propensity for a bit of fire? Well I’m glad you asked. I bought one of these and it seems to work pretty well: 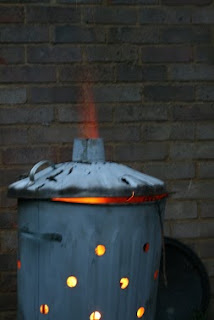 Best of both worlds isn’t it Unbridled manly fire and a bit of safety first BBQ’ing.