A little over a month ago Loop offered us one of their electricity monitoring doodahs for review. We’re very keen on minimalising the cost of power in our house- I certainly can’t minimalise the use of it unfortunately!

Loop is a device in two parts, three if you include the website/smartphone app that you do the detailed stuff on. There is a little device that plugs into your router and chats to Loop’s servers, giving them all sorts of useful data that can be analysed and there is another bit, the Loop transmitter, that clips round one of the electricity cables coming out of your meter.

Plugging everything in takes all of 5 minutes, and the only part of it that is slightly bothersome is the fold flat plug adapter for the receiver that plugs into the router. It really needs to go into a multitap because it protrudes an awfully long way from the wall otherwise. 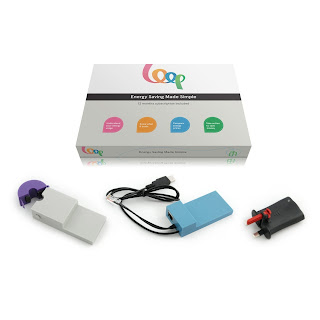 I have to admit when I unboxed the device and plugged it all in, I wasn’t enormously impressed with the aesthetics of it all. The receiver (the blue device in the middle above) looks a bit utilitarian compared to the receiver for our BG smart thermostat but then I had to do a reality check- Loop costs a mere £29.99 for the device and a years subscription to their service.
You see, as well as monitoring what your consumption is, Loop is tied in to the Uswitch price comparison website. When you register the device you put in a lot of details about yourself and your current electricity supplier. After a month of monitoring, Loop allows you to see a price comparison based on actual usage. It is limited in so far as it can only monitor the electricity usage, not gas, but even based on this, I could save £75 or so a year on my electricity bill based on the recommendations I’ve just had through. So that’s £45 over and above the cost of the device. Which is nice.
Yes, I know I could probably do the same sort of analysis by religiously noting down meter readings on a daily/weekly basis but to be honest it’s interesting to see that today we spent £1.36 more on electricity than we did yesterday. What was the difference? Was it the tumble dryer running due to the thunderstorms? It does make you think a lot more about your electricity needs and usage.
Using the app (I used the Android version but it’s there on IOS too) and the website, you can set daily targets, most of which I fail to meet. I blame the fact we have a plasma television. Honest. The app is generally quite good but it’s a HTML5 based app, not a native app. This means it’s basically a mini website running on your phone rather than being specifically designed as a programme that pulls it’s data from a remote server. It’s not quite as smooth as it could be and I have come to slightly resent the incessant logging in. Perhaps that’s me and I’m a deeply trivial person. Who knows. The website is better but I tend to use the app more, just to see how well I’ve done compared to the previous day.
I have to admit, when I was initially offered Loop for review, I said yes without considering the price or anything. The concept itself was enough to enthuse me and on finding out it only cost £29.99, I would say it is pretty much a no brainer. If you want to run it for more than a year, an additional years sub costs a very reasonable £4.99. Loop is available from Amazon for £29.99.