We’ve got the Jen and her merry crew staying over tomorrow night (hurrah!) so it figures that we’ve had a mini disaster to stop us clearing the house up prior their arrival. So no, in case you were wondering, the title doesn’t refer to the maelstrom that her boys are likely to cause, and our kids can manage just as much chaos anyway. 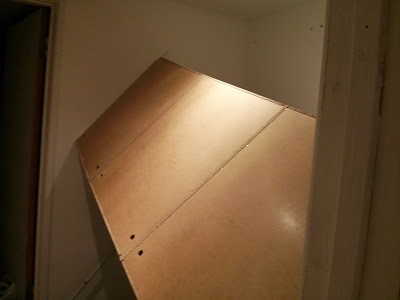 On Wednesday evenings I like to run around on astro turf and pretend I’m 20 years younger and good at football. The pretending I’m good at football bit is the easier of the two because I’ve had over 20 years of practice at that but never mind. Due to everybody’s work commitments, we don’t play until 9pm, so by the time we’ve cooled off and driven home, it’s often about 10.30. I was enjoying a Cornetto as part of the cooling down process when I heard the titular Crash bang wallop!!!

Thank goodness it happened at night and not during the day when kids might have been strolling about and thank goodness it wedged itself in the plasterboard rather than wrecking the work top but most importantly thank goodness none of my single malt bottles were broken.