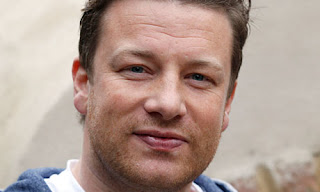 Multi millionaire mockney Jamie Oliver is busy being lambasted all over social media for selective parts of an interview he did with the Radio Times that have been picked up and quoted out of context.

Let them eat stale bread, the Independent proclaim, in reference to Marie Antoinette’s famous cake quote. What Oliver was getting at, albeit in either a clumsy interview or a clumsily edited (on the part of the Radio Times) interview was buying ready meals or take away isn’t as cheap as eating food made from basic ingredients. Whilst I do think it’s difficult to eat frugally AND ethically I don’t think it’s difficult to eat cheaply without resorting to eating microwaved rubbish, so he’s right in that respect.

His comment about buying 10 mange tout from a market stall doesn’t particularly ring true. Personally I’ve found our local markets produce expensive and not very flexible- one stall sells stuff by the “bowl” for a pound- the size or contents of the bowl dependent on the product. Perhaps he’s lucky in that he has a good market near him.

I’m not going to get drawn into his comments about people eating chips out of styrofoam cups whilst watching a massive TV; that happened in one of his shows but it is dangerous to make generalisations out of specific situations. It is also true that, like a lot of celebrity chefs, Oliver’s meals aren’t actually that cheap to make once you’ve spent all the money on the perishables you only need a pinch/stalk/couple of bits of but again that’s by the by and is a distraction from the main thrust of his argument, which is educating people to eat properly.

Is it peoples inherent laziness that means it’s easier to get cheesy chips in a styrofoam cup than actually cook something in the kitchen or just a lack of education? Who knows and I doubt there’s a simple answer. What answer there is probably involves canny joined up cooking rather than a selection of recipes from his new TV show though. Buy a kilo of mince and you’ve got the base to do a cottage pie, a chilli and spagetti bolognese or cannelloni  that’ll feed a family of 4 for three consecutive evenings. It’s not rocket science but the kind of cheap and cheerful eating that Oliver’s new show (which he was of course plugging in his interview) will undoubtedly ignore.