Since the 6 year old is a fanatical Doctor Who fan, we’ve kept him in line all weekend with the promise of finding out who the new Doctor was going to be on Sunday evening, 7pm, in a special unveiling show.

It was billed as unique of course but I remember way back in 1987 the 12 year old me burst into tears watching Blue Peter when the bumbling idiot from Eureka!, Sylvester McCoy, was unveiled as Colin Baker’s replacement.

Don’t believe me? (About the TV reveal, you’ll have to trust me on the bursting into tears bit):

So there was a fair degree of trepidation going into last nights programme. Some of the names in the running were okay, some absurd. Who is a lot like Bond in a way, there is always the media there attempting to provoke controversy, whether it’s the clamour for the first black Bond or the first female Doctor, neither of these things are particularly what the fans want. Russell T Davies has pissed about with the history of Doctor Who enough that certain canon no longer stands- Time Lords always used to keep their gender, so if you were a male Time Lord, you’d always regenerate into another bloke. Otherwise it’d be daft: imagine back in the day you courted another Time Lord, got married, they had an accident whilst ironing and you came home only to find out your wife was now your husband. It wouldn’t make sense.

We had to send Fifi from the room because she wasn’t interested in the show. What she was interested in was playing the xylophone really really loudly, something she’d shown no interest in for the entirety of her four and a half years on planet Earth to this point.

Considering the BBC reckoned they’d sold the show to about 50 billion countries and thought it might be one of the biggest simultaniously broadcast non sport events ever, it was typically (old style) Doctor Who low rent. A few no name celebs and Zoe Ball looking very manic before Peter Capaldi stepped out of the TARDIS. 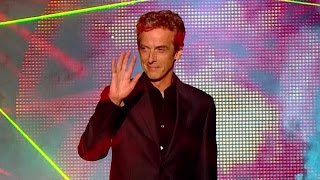 I breathed a sigh of relief. A lot of the thoughts about him being the new Doctor had been dismissive- he was too old to sell lunchboxes to 6 year olds- and in fact he is roughly the same age that William Hartnell was when the series started back in ’63. He’s certainly old enough to be Matt Smith’s dad, which is funny.

The boy wasn’t completely sure what to think, he likes Matt Smith, David Tennant and Tom Baker, in that order, but he was caught up in the moment. He ran off to the over room to tell his sister they’d announced the new Doctor and the man playing him was called “Chicken Paldi”, which is a bloody good name if you ask me. In fact, if it had been the actual name of the Doctor in the episode The Name of the Doctor, I don’t think I could have been happier.

So, we’ve got two episodes of Matt Smith left. The 50th anniversary one in November and the Christmas special. Lets enjoy them before Mr Paldi makes his grand entrance!