The littlest has his sleep issues, mainly that he’s not keen on it much. At least not at night time. He was up until half past nine last night and at one point he wandered off, wifey presumed to get a book, but she found him a couple of minutes later downstairs, with the telly switched on to Cbeebies. No luck there matey, it’d been off air for two hours.

Yesterday wifey took the kids up into London to the Tate Modern. It’s a fairly straightforward trip for us- FCC from St Albans to Blackfriars and then a 10-15 minute walk along the South Bank. A certain little man insisted the pushchair was left in the cloakroom and proceeded to tear-arse it around the Tate. It wore him out and on the 5 minute drive back from the station he fell asleep.

I lifted him into the house and popped him down on a cushion. A few minutes later tea was ready and it was time to wake him up… 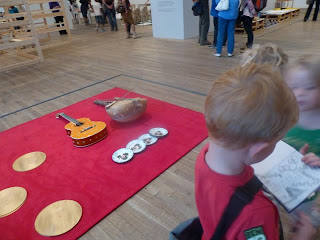 The boy loved the Tate by the way. He’s a very visual person and spent ages staring at the art, taking photos and doing his own interpretations in his notebook.
It’s inspired him!