So Two Little Fleas want to know our ideal night in given we’ve got a budget of up to £750 to spend on it. Oh dear. Initially I thought about going the total bloke route and blowing the entire wodge on one of these puppies:

This is five hundred and ninety nine pounds worth of virtual surround sound for your (or MY) television from those lovely bods at Sonos. The balance of the money would have been spent sound proofing our sitting room with this stuff so we could enjoy an evening in peace without the kids interrupting.

Last year we had our garage converted and turned into a playroom for the kids. They have their own telly, sofa, toys and table in their. The only thing they’re missing is a toilet and fridge for entire self sufficiency. This means we’ve gradually reclaimed our sitting room for ourselves. Which is nice. What’s funny is we find ourselves watching relatively little television as a result of having a grown up room once again. Sure, once a week we might watch a movie but generally we either sit reading books or doing creative things like sewing, writing or making home movies**. One of the things that helped us enjoy our time is our Sonos PLAY:3 music streamer. Hooked up to our ripped CD collection and Spotify, we have a near inexhaustible collection of music to listen to. And we both love music. To me a good piece of music connects on an emotional level and speaks to you in way simple words can’t. Whether that emotion is joy, anger or melancholia, there is an abundance of music for whatever mood you may be in. If not, I usually suggest listening to the theme from Ghostbusters. That sorts pretty much anybody out.

On a Friday night we let the kids stay up late and have a disco with a specially prepared playlist. It has AHA, Ray Parker Junior, Fuzzbox and tons of other music that’s kid friendly and can be danced to. Ned particularly loves it although on occasion when they don’t like the song playing, they get distracted:

So sword fights aside, music is a big part of all of our lives.

To this end, what I think I’d probably spend a completely frivolous £750 turning our living room into a proper 1970’s style disco.

First off, no proper 70’s disco is complete without proper lighting. I’d pop here for a ceiling mounted motorised mirror ball (£87) and four wall mounted colour changing spots (£40 in total). I may not be Tony Manero but even I know that lighting is important. 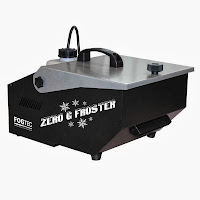 Of course the lighting isn’t the be all and end all. Oh no, and to this end I have a trick up my sleeve. After extensive googling I’ve spotted a rather funky dry ice machine (flashing disco floors are unfortunately a wee bit out of our price range and probably a safety issue with a manic one year old).

And lets face it, if a company has the balls to call itself Fogtec, it doesn’t matter if other dry ice machines are cheaper or better, I’m going to buy one of theirs for £140.

To finish off the decor because ambiance is pretty important, we’d have a few posters up on the wall, including the obligatory Saturday Night Fever poster. Maybe we’d even frame a few of the Smash Hits centrefolds that wifey still has knocking about, just to bring a bit of the 1980’s into the mix. That’s just how we roll. With frames and posters, I’m calling that 30 quid of my budget.

So now we have the ambiance for our disco. What we need some is something EVEN more frivolous to make it a proper 70’s disco. That’s right, we need some decks. I love the ease of digital music but if you really pressed me, I’d secretly admit I really really miss the crack and pop of vinyl. All my favourite albums were originally released on vinyl, the songs were written and put together with the implicit understanding that you have about 22 minutes per side on an LP and no more.

So yes, I’d spend a £150 on a big pair of floor standing Mission speakers, preferably finished in 70’s wood vinyl effect, and another £250 on an amp and a turntable.

And I’d spend the remaining 50 quid or so on a big stack of funky vinyl from Empire Records, our new record shop in St Albans. It’s good to shop local after all.

Of course once the planning has been done, the biggest challenge will be making sure all the Matchbox cars  and other stuff that gets dumped on the sitting room floor is cleared up because lets face it, nobody wants to stand on a toy car obscured by dry ice. It reminds me of the time Ozzy Osbourne couldn’t read the set list or the lyrics sellotaped to the stage because they were completely hidden once the dry ice machine went on. He was cross and I’d be equally cross if I stood on Thomas the Tank Engine. My super powers only extend to walking over Lego barefoot and feeling no pain.

On the guest list would be our friends from Little Garden Helpers. Once the kids have discoed into exhaustion, the grown ups and continue while the sleepover commences.

So that’s it then, our Big Night In would be a frankly awesome 70’s Disco in our own living room. You’re only young once but nobody ever said how long you get to stay young!

*well I admit, it’s still there but you know, it’s not exactly a rational, explainable, justifiable amount to spend on a sound bar is it?

**not THAT sort of home movie. Get your mind out of the gutter.