When the Nerf N-Strike Elite RapidStrike CS-18 Blaster arrived for review, I was enormously keen to get some shooting in. It has an 18 dart cartridge and fires over 3 darts a second. Unfortunately it also takes 4 C cell batteries, which meant I had to go battery shopping instead of shooting people. Other versions with a magazine take 7 AA batteries, which is a lot but you’re more likely to have these sitting around the house than the rather hefty C cells.

Still, once we were loaded up with batteries, the fun could start and we had a lot of fun. We’ve got one other battery operated Nerf gun, the N-Strike Barricade RV 10, which as the name suggests is a 10 shooter. It uses a revolver type mechanism, is a lot smaller and from playing over the weekend, a lot more prone to jams that the CS-18 is.
One thing the video doesn’t show is the extendable shoulder butt. This makes you feel like you’re in the SAS. Really, it does. If the SAS carried Nerf guns at any rate. There is a pressure safety catch below the trigger, which helps save on battery- the whirring starts once this is depressed and you can’t pull the trigger without first holding down the safety. The quick release for the magazine is similarly easy to operate, even though the magazine snaps in with a satisfying click.

After a weekend of playing, the batteries appear to have died, which isn’t very impressive but we did have an awful lot of fun with it as the video suggests and we also played with it a lot. It’s so addictive launching 18 darts in 7 or 8 seconds that you’ll find yourself pulling the trigger until the magazine is entirely empty most of the time. You can squeeze off individual shots if you want to but it’s not as much fun. As you can see from the video, the shot spread is a foot or so each side of centre when the boy fired it. Some of this is down to the front end weight but when I had a go I found hitting a pendant lampshade from the other side of the room a little hit and miss, so accuracy isn’t up there with the best single shot Nerf guns. Still, you’d be hard pushed to miss 18 times on the trot.

You can pick it up for £29.49 from Amazon, which makes it one of the more expensive Nerf guns out there but in terms of value for fun, it’s right up there. You can also pick up additional magazines for about £11 with darts, which is extremely tempting. So far I haven’t succumbed but I know the next time we do something like this: 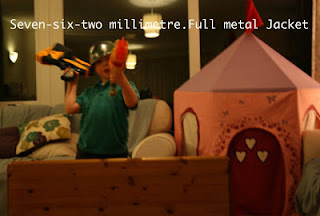 Having a couple of 18 dart clips to hand will probably be invaluable. Planning ahead is only sensible isn’t it???

Gripes? The 4 C cells sit in the muzzle, which makes it very front heavy and not really suitable for one handed action if you’re 6 and the battery life could be better. It only jammed a couple of times, both of which were straightforward to clear (unlike the Barricade, which can be a pig) and it was easy to operate. Well worth the investment if you’re a Nerf’er in my book.