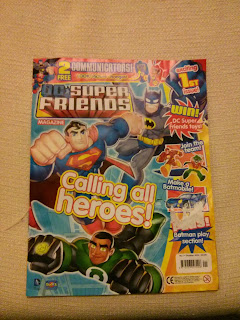 DC Comics have been strangely quiet in the world of pre schoolers up until now. The shelves are packed full of Marvel stuff (well pretty much everyone guests in their Spider-Man title) and there are comics for Ben 10 and just about everything that has a TV show or series of movies. DC Super Friends Magazine is squarely aimed at 2-5 year olds. They say boys but my four year old girl defiantly says 2-5 year old kids.

At 24 pages for £2.99, with 3 pages of adverts/competitions, the content could do with a little beefing up. As it’s aimed right at the bottom end of the magazine market, there isn’t actually a comic strip in there, which given the origin of all the characters is a little bit odd. There is a two page story which is about the attention span of our almost two year old but the almost five year old actually read it fairly quickly.Unlike a lot of the other comics aimed at this age group though, there is a consistent design style all the way through. If you’ve ever played DC Imaginext, the characters are drawn just like the figures from the playsets, so your kids will be immediately familiar with their favourites. No sign of Wonder Woman, which is a shame as boys need to learn girls are cool from an early age in my book.

Some of the activities were very good though, particularly the Batmobile model, which confounded expectations by actually being relatively easy to make and not looking completely crap once we’d made it. It’s currently hidden in the boys den under his new “high up” bed because he rates it that highly, so I’ve got absolutely no chance of showing you a picture of it. Suffice to say it’s pretty good.

DC Super Friends Magazine is monthly, the 1st issue was out 19 September and is the one pictured. Issue two is out 17 October. Although we got this for free, I shall probably see what issue two is like as it’s only £2.99 and keeps a little one occupied (with assistance) for a fairly long time. Makes a change from reading Doctor Who Adventures all the time!