In some ways the iPad is a big lump of contradictions. A touch screen is brilliantly intuitive for small kids to use and in fact Ned, our resident one year old, can actually unlock wifey’s iPad and happily play on some of the kids apps on it. Brilliant! We have ceramic floor tiles in the kitchen and every time I see him carry the iPad into the kitchen to show wifey what he is up to I almost have a heart attack. Disaster!

This is where a case like the Kensington Safegrip comes into it’s own. The promotional material may show men in hard hats and high visibility jackets on construction sites using the case to protect their iPad and I’m sure that does happen but lets face it, the Kensington Safegrip is really there to protect your precious from you little precious.
The Kensington Safegrip comes with an insert so you can use it with different models of iPad but we found it fitted our iPad mark II without the need for any tinkering. To insert the iPad you simply apply some pressure and fold back the bottom bit and then pull it over. There is absolutely no chance of it falling out and since it sits proud at the front, it should protect the screen in the event of a fall. It won’t stop the screen getting cracked it something hits it of course but drops from child height are now less likely to illicit a sharp intake of breath. 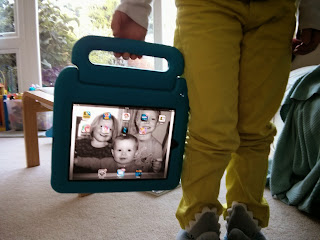 The carry handle doubles as a fold around stand and is chunky enough to be reminiscent of a good old fashioned Tonka toy (remember those?). It makes it a one handed carry for kids, which a normal uncased iPad definitely isn’t.
Are there any cons to the Kensington Safegrip? As you can see the protection does add some bulk to the device. It doesn’t add much weight due to the lightweight materials but it does add quite a bit of size, making it that bit harder to slip into a bag. It’s completely ideal for round the house or in the car but the portability is compromised slightly. Additionally your svelte trendy looking piece of Apple design now looks considerably more clunky. But that’s considerably more clunky AND childproof to boot.
The Kensington Safegrip retails for £39.99, which whilst not cheap, is in keeping with prices for iPad cases and is certainly a lot cheaper than the two year extended warranty we purchased along with the iPad to protect it form the children.