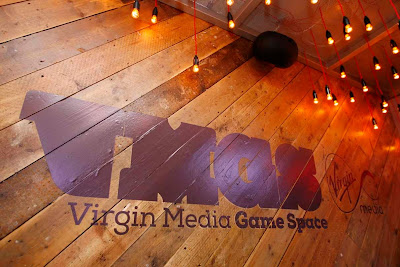 Open until 21 September, the VGMS has a truck load of stuff you can just pop in and play on console or PC but the highlight has to be the number of Oculus Rift virtual reality headsets with Strike Suit Zero playing on them: 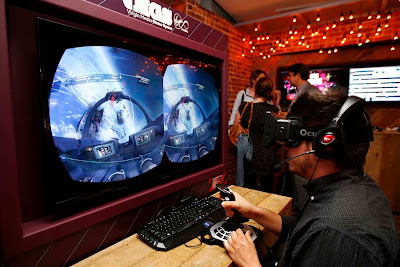 I had a nice long go on an ever so slightly sweaty Oculus Rift and have to say I was impressed. The motion sensing is really suited to a space shooting game, and the 3D effect is incredible- the most immersive experience I’ve had in over 30 years of gaming.

I also had a play with Jeff Minter’s latest game, another rewrite of Tempest 2000 on the Jaguar from the late 90’s, this time it’s on the PS Vita. It’s fun but pretty much the game I remember playing in Rumbelows all those years ago. The basement had Rome: Total War 2 running in the background, and a few retro table top cabinets. I may have had a quick go at Golden Axe and Bombjack. I may have sucked at Bombjack as much as I did first time round.

As well as functioning as a drop in arcade for playing some funky up and coming titles, there are also a truck load of special events too. Ranging from game jams to retro LAN parties, there is a busy schedule of activities from now until 21 September.

How funky is the venue? Extremely. Gaming is, despite how the mainstream media try to portray it, mostly the realm of 25-35 year olds, and getting to play stuff in a trendy pop up in Shoreditch can only help!